“Can you hear me now?” Upgrading Spruce Pine’s Phone System 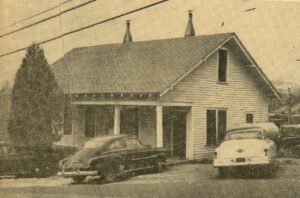 Southern Bell Telephone and Telegraph Company opened a new exchange building on Walnut Avenue in Spruce Pine in May 1953.  This new, larger structure replaced the old telephone office shown above.  Calvin Hall recalls that the old office also sat on Walnut, but closer to Oak Avenue, just above the Fortner Insurance building in Spruce Pine.

A 3-page spread in the Tri-County News on 5/7/1953 documented how the Spruce Pine-Newland Telephone Service had gone “From Ox Cart to Atomic Bomb Era” with the flick of a switch.  Twenty photographs illustrated the process by which the local phone system was converted to a dial system.  The rotary dial telephone was patented in 1892, but was not common until Southern Bell began using a Western Electric model in 1919.  Work crews from Western Electric installed the equipment in the new building in Spruce Pine.  Also mentioned in the article were Fred H. Cook and Jack Wilson, Spruce Pine installers and repairmen.  “Miles of the most modern type of cable were installed in Spruce Pine and vicinity, leading from the new exchange building in all directions.  Cables contain various numbers of wires and practically insure against failure of service during storms.”

Southern Bell first came to Spruce Pine in 1925 with the purchase of a small local telephone company with about 50 telephones, according to a 7/13/1952 Asheville Citizen-Times article by Ashton Chapman.  By the time the new Southern Bell exchange was built in Spruce Pine, the number of telephone subscribers had increased 14 times.  “What seem to be countless wires were required to enable the dial system to function automatically” in the new exchange.

The telephone exchange building built in Spruce Pine in 1953 had a 10-position automatic switchboard.  Because most of the operators were female, “the company makes special efforts to provide good facilities for them to relax when not working,” including a ladies lounge with a snack bar.  Some of the women operators were Bonnie Puckett, Louise Johnson, Kathleen Sullins, Lillian Cooke, Lyla Hughes and Betty Broadway.  In 1967, newspapers reported that Bonnie Puckett, unit supervisor at the phone exchange in Spruce Pine, had been presented with a gold pin marking her 25 years of service to the company.

Party Lines, or shared service lines, with multiple phone service subscribers, were the norm for home telephones at mid-century and even up to 1971 in NC.  Monthly residential telephone rates were $3.15 for one-party service, $2.65 for two-party service, and $2.40 for four-party service.  Long-distance calls of course cost more.

Touch-tone phones with push buttons were introduced at the 1962 World’s Fair, although they weren’t in widespread use until after the 1970s.  The near monopoly of Southern Bell Telephone and Telegraph over local telephone service was broken in 1982 when “Ma Bell” split into seven “Baby Bells,” one of which was Bell South.  Several mergers later, local telephone service in Spruce Pine would once again be provided by American Telephone & Telegraph, established in 1885 by Alexander Graham Bell.  The building Bell Telephone moved into in 1953 is still the hub of ATT operations in Spruce Pine.