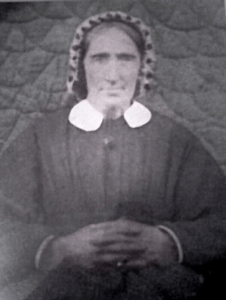 Driving up Cane Creek Road in eastern Mitchell County there is a community called Clarissa. (Most people may pronounce it “Claircey”.) The story of how the name of this settlement came about dates back to the era of the Civil War. Clarissa Baker, daughter of Senator Thomas Baker and Susannah Wiseman Baker, was born in 1812. In 1836 she married Arthur James Buchanan, the son of Joseph Benedictor Buchanan and Sarah Jones Buchanan. Arthur James was a large landowner whose holdings stretched from Sandy Branch to Hawk. Together they had ten children, six girls and four boys, Susannah, Sarah Ann (Sally), Nancy, David, James Henderson, Joseph, Thomas, Caroline, Mira, and John. Clarissa taught all of her children to read and write using the Bible and the Blue Back Speller as textbooks. Although Clarissa and Arthur were large landowners, they were opposed to slavery. Life during the Civil War was difficult for the family, and to make things worse Arthur died in 1863, leaving Clarissa to raise this large family in the middle of the conflict. When the war broke out and men of fighting age were being conscripted, she was able to slip two of her sons, Joseph and David, by the Confederate lines to Union forces as they didn’t want to fight for the Confederacy. “Her intelligence, leadership ability and speaking ability were feared by the Confederate Home Guards who illegally confiscated property, livestock, and food from the families who fought with the Union” according to the plaque dedicated to her at the Clarissa Community Center. After making it through the Civil War, Clarissa continued to show her fighting spirit and ingenuity. Having to be the head of the household as her husband had died, she not only took care of the daily tasks inside the home, but outside as well. One day while she was out looking for her livestock she discovered a huge piece of mica out of which she made a sun bonnet. A visiting miner from New York heard about this and asked to see the place where it came from. Thus began the Clarissa Mica Mine, one of the three oldest mica mines in Mitchell County along with the Horse Stomp Mine in Little Switzerland, and the Sink Hole Mine near Bandana. She later sold the mine to a company from England around 1870. Mica from this mine was used until the 1950’s. Clarissa died on January 15, 1877 at the age of 64 and was buried beside her husband in the Chestnut Hill Cemetery in, of all places, Clarissa, North Carolina.