“One of our most cherished teachers” ~ James B. Blevins 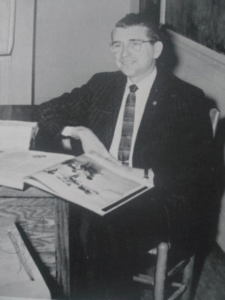 The 1963 Senior Class of Bowman High School dedicated their annual to “one of our most cherished teachers, James B. Blevins.” Until his untimely death at 37 from complications of multiple sclerosis that year, which attacked him only 2 years before his passing, he was a respected teacher and a good friend to his students. He was demanding, yet always fair and helpful with a smile and positive comments in every class and with every assignment. Little did his students know that this gentle person served his country with honor during the last traumatic years of WWII.

James Bailey Blevins was born April 21, 1925 the youngest of 3 sons of Taylor Dewitt and Inez Julia Young Blevins. He shared the name of his great grandfather, James Blevins, and his maternal grandmother, Ella Maria Bailey. His brothers were Robert Lee and George Nathaniel.

James was an 18-year old student at NC State when he registered for military service on his birthday, April 21, 1943 and enlisted on July 3, 1943. His enlistment states, “Enlistment for the duration of the War or other emergency, plus six months, subject to the discretion of the President or otherwise according to law.” He went on to serve until the war’s end two horrific years later for a total of 31 months.

James began his training at Camp Croft, Spartanburg, South Carolina. Most of the trainees at Croft were “selectees,” as was James, meaning they were men drafted into service through Selective Service rather than volunteers.

Until additional information becomes available, much of James’ military career can be “read” from his Army uniform jacket now in the safe keeping of his son. The “Ruptured Duck,” as the eagle in a circle was called, along with two good conduct metals, indicate that he was discharged honorably. On the left shoulder, the patch indicating the unit in which he served last is that of the 9th Infantry. On the lapel is the brass castle or engineer designation. Confirmed by a newspaper article, he was in the 15th Combat Engineers during the last months of his enlistment which was a part of the 9th.

According to army regulations, a soldier may wear the patch of a former unit on the right shoulder. That patch on James’ jacket is of the 45th Infantry “Thunderbird” Division. According to family tradition, his wife, Inez Johnson Blevins McRae, has recounted that James had been traumatized when his unit participated in the liberation of a Nazi concentration camp, yet he never said which one. Considering this, the following scenario is likely to be a good description of his service in WWII:

Based on the “usual” time for basic training 12-13 weeks he could have been shipped out in Oct/Nov/Dec ‘43. Considering that soldiers coming out of Camp Croft were usually “replacements” it is possible/probable that James may have been with the 45th  when they advanced up the Italian peninsula then landed at Anzio in February 1944, where it withstood repeated German assaults against its positions. Cutting across the country, the unit was sent to southern France in August 1944. It quickly advanced through western France, reaching the German border by the end of the year. In March 1945, the “Thunderbird” division crossed the Rhine River and headed southward. On April 20, it captured the city of Nuremberg and on April 30, Munich.

As the 45th Infantry Division completed its drive on Munich, the unit was ordered to liberate the Dachau concentration camp. On April 29, 1945, three US Army divisions converged on the camp: the 42nd Infantry, the 45th Infantry, and the 20th Armored. When the three units arrived at Dachau, they discovered more than 30,000 prisoners in the overcrowded camp. James had just turned 20.

No documentation has been found which confirms that the 9th Infantry was involved in the concentration camp liberation efforts. Therefore, James probably was reassigned to the 9th to serve out the remaining months after Dachau.

It is difficult to imagine the mental toll 31 months took of an 18-year old Carolina mountain boy who had spent less than a year at NC State in Raleigh. However, there is no indication that he was wounded otherwise, that he was treated for PTSD, or suffered from other traumatic injury after he returned home.

He came home around February 1946 and likely entered Appalachian State Teachers College that summer or fall. On December 6, 1946, he and Inez Elizabeth Johnson, daughter of George and Pearl McKinney Johnson of Toecane, were married in Boone. Inez had graduated from Maryville College and was teaching home economics at Bowman High School. After a brief wedding trip, James continued his studies at Appalachian State Teachers College where he was a member of the Playcrafters drama club and YMCA. He graduated in August 1949 and accepted a position teaching at Harris High School where he directed at least one senior class play.

Later he was transferred to Bowman High where he taught until his death. His service to the community was significant including holding several offices in the Bakersville Lions Club including that of President just before he died. He was active every year in the N.C. Rhododendron Festival, a member of the volunteer fire department, and was Sunday School Superintendent and teacher in the Bakersville Methodist Church. One of his dreams was to be the proprietor of a general store like his uncle George Young. Although he did build one beside his home in Bakersville, he did not have the opportunity to realize a success there. Neither did his two young children have the opportunity to enjoy his love and attention as a father although he remains a cherished memory to them.