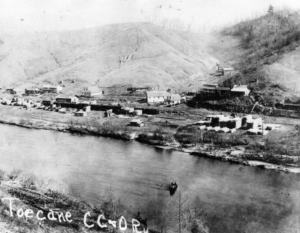 Indigenous people came through the area where Cane Creek meets the Toe River at least four thousand years ago on their way to their hunting camp up Cane Creek near Sandy Branch. In 1540, de Soto came close to the area on his way to his overnight camp at Webb then on to Guaxule (Erwin). But  the story of Toecane really begins with the Johnson family.

Between 1863 and 1870, Thomas (Thompson) and Margaret “Peggy” Forbes (Fawbush) Johnson purchased about 250+ acres of land on the Toe River from the Davises and Burlesons among others. In 1880, their son, William Johnson (32), listed as a farmer, and Elizabeth Gouge Johnson (33), as a housekeeper, with 4 children, C. Hunter, Timp, Tweetie, and William W. were recorded as living in the Bakersville Township. In 1881, William purchased 80 acres “on the waters of the Toe River” from Thomas and Margaret. Elizabeth died in June 1883 then William, in 1884, married Elmira Stewart, daughter of John C. and Mahala Gurley Stewart and niece of Francis “Frankie” Stewart.

In 1897 William and Elmira purchased an additional 10 acres “on the mouth of Cane Creek” from his brother Wilson Johnson and C. Garland making his total property holdings to be the approximate the size of what we know today as Toecane.

In 1900, William was listed as a merchant with 2 sons Roscoe (11) and Desoto (10) along with his father Thompson whose wife, Margaret, had died in 1887. William had opened one of the first stores that eventually were to be located in Toecane.

A new transportation system put William in a unique and important position as the land owner of a significant portion of Toe River front property. By 1893, the Charleston, Cincinnati, & Chicago Railroad Company, commonly referred to as the 3 C’s, had laid 20 miles of track between Johnson City and Chestoa (Erwin) on the way up the Toe River. The CC&C was the brain child of John T. Wilder, best known locally for having built the Cloudland Hotel on Roan Mountain; however, financial problems from the Panic of 1893 forced him to let the company go and it became the Ohio River & Charleston Railway Company which reached Huntdale in 1899. Apparently the company called the area near the mouth of the Cane Creek, Intermont Station.

In January 1902, William and Elmira, “desirous of promoting the building of the South Western Railway Company” sold a strip of land on the north bank of the Toe River. The name diffeerence resulted from George Carter who had purchased the tracks from the OR&C that year and named his line the South and Western Railway. In 1908, the line was rechartered as the Carolina, Clinchfield, and Ohio Railway (CC&O) then in 1924 it became the Clinchfield Railroad.

With the obvious developments, the area known as Intermont Station needed postal service; however, equally obvious, the local population preferred a different name for their community. In May, 1902, the first post office was established in Toecane with John Richmond Garvin as the first post master, perhaps in William Johnson’s store building.

By 1909, a reporter from the Charlotte Evening Chronicle said, “Toecane…is the centre of the greatest developed wealth along the entire line.” Until 1954, when railway passenger srvice ended and the post office closed, Toecane had a successful economic presence in Mitchell County.

In its heyday, Tocane had as many as 300 residents and trains stopped twice a day at the depot, one coming up and another going back. The depot had day and night shifts and three taxis came to Toecane daily. People often came from one of the other stops on the Mitchell County line to shop and then return the same day. Also, families all along the line conveniently would go over to Unicoi or nearby to visit relatives.

The Jordan Manufacturing Company, in the 1920’s, under the direction of A.D. Roper, established a production facility known as the “Bobbin Plant” which made “bobbins, cops, skewers, and clearer rolls” for the textile industry.

The first electric production service in Mitchell County was located in Bill Masters’ 3-story mill operated by a water wheel which turned a generator that Masters purchased from a company in Knoxville. The Bakersville Milling, Light and Power Company was located on S 166.77 of the rail line near the coal trestle in the 1920’s. Masters negotiated a special track that was laid to accommodate the mill. The building burned in 1933 and Masters rebuilt in the present location on the other side of Cane Creek.

Stores in Toecane have included the Hughes Brothers and Roscoe Johnson’s which also served many years as the post office. Grove Greene, Clarence Wilson, Brown Wilson, the Blevins brothers, Joe Johnson, and Phil Hight had stores. Warfield Brown kept a soda fountain in his store, Jess Johnson had a restaurant, D.O. Blevins owned the Gulf Oil Company, and Frank Canipe ran a movie house. There were 2 hotels which were busy throughout the year with salesmen from as far away as Chicago and travelers, some heading up to the Roan by hack to Bakersville. There was a barber shop and a dentist’s office.

Commercial products of all sorts were shipped in and out—cattle, lumber, horses, apples, herbs, flour, mica—anything that modern transportation could carry. In 1913, over 6,000 bushels of apples were shipped out.

In 1916, the Road Commissioners of Mitchell County accepted bids for the first macadam road between Toecane and Bakersville. In 1919, the first paved road in Mitchell County was begun following the same path, but with many enhancements.

Toecane was the center of commerce for Mitchell County at that time. The stores in Bakersville flourished with access to goods brought in by the trains, yet residents found a wider range of choices just 3 miles away. Residents up and down the line boarded the train to purchase everyday items regularly as well as “come down” at special times for Christmas shopping, new dresses and hats for Easter, or getting ready for weddings.

Today, two trains come thru Toecane, but they never stop. The depot is just a memory and only one of the existing store buildings, once operated by Emmitt Wilson, continues to contribute economically now as the art studio and gallery of the respected glass artist, Judson Guerard.

Thanks to Michael Joslin <michaeljoslin.com > for allowing the author to use information from his September 20, 1995, Mitchell News Journal.