The School Beneath the Roan 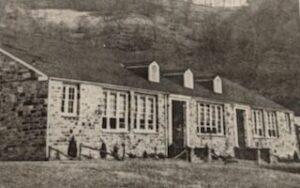 In the wake of the Covid-19 pandemic, the Mitchell High School class of 2020 took part in a historic graduation at Lavonia Crest. As they rolled through their parade on their way to becoming alumni of MHS, the graduates may have noticed the old gray building on the left, a building that is the home of school memories long ago. According to the 1953 yearbook, the beautiful building of the Glen Ayre Administration Building was established in 1940. Twelve years later in 1952, Glen Ayre became one of the first standardized elementary schools in Mitchell County.

As noted in the yearbook, librarian Mae P. Slagle was in charge of 1,166 books, all of which were classified according to the Dewey Decimal System. The school lunchroom was established in 1947. The school cooks, Mrs. Gladys Ollis and Miss Ruth Stevens were in charge of feeding an average of 108 students per day, all while ensuring that it always maintained an A Grade rating. The lunchroom at the time was valued at $3,000.00.

The 1-7 grade school was led by Principal Holden Edwards who also taught 7th grade. Extra-curriculum activities at the school included a basketball team and a 4-H Club. The 7th grade class of 1953 was represented by Class Colors: Blue and White, Class Flower: Pink Roses, and the Class Motto: “By the ropes of the past we ring the bells of the future.”