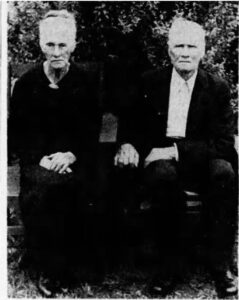 On June 17, 1940, an article appeared in the Asheville Citizen entitled “Mitchell County Farmer Uses Own Family to Build an Ideal Community.”  The piece, written by Mrs. Romulus (Constance Jolley) Duncan of Spruce Pine, a frequent contributor to local and regional publications, was about George Rufus Dale.

Two sons of Henry Dale and Elizabeth Poteet of what is now McDowell County moved up the mountain to raise families; the older was John H. Dale (1827-1865), who married Sarah Olivia Hall (1831-1897).  The other son was George Rufus Dale, born about 1833, who worked at George Greenlee’s Store in the Grassy Creek community.  According to the story his son told journalist Connie Duncan, as G.R. Dale came up the mountain towards Gillespie Gap, he would often see a young girl hanging out clothes to dry or doing other tasks.  He assured a companion, “That good-looking young woman may someday be my wife.”  She was Rachel Mace (1837-1919), the daughter of Newsome and Susannah McFalls Mace.

George Rufus Dale and Rachel Mace married about 1855 and were the parents of 4 children:  Jane Augusta McKinney, James G. Dale, Susan Elizabeth McKinney, and George Rufus Dale, (born 8/26/1862.)  G.R. Dale, Sr., according to one source, served during the Civil War with South Carolina Troops, in Co. D 6th Regiment.  He died 2/28/1862, whether in battle or from illness, 6 months before the birth of his namesake.  Rachel remarried, to James Alfred McBee (1845-1929), and had 7 more children.

George and Elvira Dale first settled on 50 acres of land in the Little Switzerland area, deeded to him by his mother.  He farmed, raised cattle, and traded horses, and because he was “a born trader with a keen insight into the future,” he became prosperous enough to acquire some of “the rich, level lands of Grassy Creek.”  There Dale continued his modern farming practices and thrifty habits, accumulating considerable property.

“Desiring to see his children prosper and enjoy their gifts during his lifetime rather than leave his fortune to them at his death,” Jolley wrote, Rufus Dale deeded his land to them; in addition, he gave them cash in order to encourage and help them along so each would be “comfortably settled and happy in his surroundings.”

The families who settled near their scion were also industrious, progressive, and lived in good homes; the community, while not incorporated, became known as Daletown.  Jolley described it as a neighborhood “where the county agricultural agent was a familiar figure and where the children go to college.”

In 1940, the Citizen-Times asserts, Mr. and Mrs. Dale enjoyed “splendid health.”  Duncan wrote that Dale “arises each morning at daybreak and goes to the barn to feed his stock.  And he is often found on the backside of the mountain pasture, supervising the building of new fences.”  The family had come through bouts with typhoid fever and smallpox, but besides the 3 babies who died of colitis, most were hearty.  Rufus Dale declared he’d had only one serious illness – when he had gone to Statesville for an appendectomy.

George Rufus Dale died 12/30/1942, less than 18 months after the Asheville Citizen article.  He was buried in the cemetery of Grassy Creek Baptist Church, where most of his family attended.  In fact, Connie Duncan wrote, “The entire population of Daletown is Baptist;” further, she stated, “they are almost solidly Republican.”  Dale’s obituary noted that he had served 2 terms as a Mitchell County Commissioner.

Elvira Dale died 11/6/1945, just 3 years after her husband’s death.  Her obituary gave the count of grandchildren as 53 plus 11 great-grandchildren.  As the photograph of a family reunion from 1972 shows, the Dales progeny were numerous.  In addition, the community established by the George Rufus Dale family continues to be a vital section of Mitchell County.  It’s sometimes still referred to as “Daletown.” 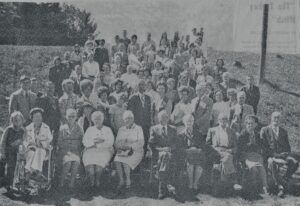