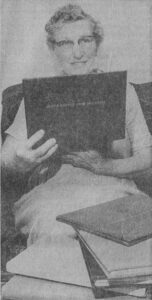 Despite numerous hardships, residents of the Toe River Valley have long placed great value on education; this is exemplified by a family from Mitchell County’s Harrell Hill community.  “The life-long goal of Mr. and Mrs. Luther Harrell was to put their seven children through college,” according to a 6/14/1959 article in the Asheville Citizen-Times.  The youngest of the couple’s 7 children, Carol, had recently graduated from Appalachian State.

Luther B. Harrell (1890-1957) was the son of Aden and Anna Byrd Harrell.  In 1913 he married his childhood sweetheart Arizona Byrd (1898-1976), daughter of Kimsey and Eliza Hughes Byrd.  The article referred to her only as Mrs. Luther Harrell, as was common mid-20th century, never by her given name.

Both Luther and Arizona completed high school.  Luther attended the Stanley McCormick Academy in Burnsville at age 19, and then spent 2 years at Berea College, working in the school dairy, where he conceived his love for dairying.  Arizona went to school in Harrell Hill and then attended Bowman Academy and the summer teaching Institute there.  An undated article (likely Spring/Summer 1948) by Arthelia “Tillie” Brooks described how young Arizona was inspired by Professor R.T. Teague, who taught at Bowman Academy.

The Harrells owned about 75 acres of land on Byrd Road in Harrell Hill, with some 25 acres under cultivation and the rest in pasturage and woodland.  Parts of the house they lived in had been built by Luther’s great grandparents, James and Mary Ingram Harrell, born about 1795 and 1796.  While Luther had kept flocks of sheep on the land, by 1959 the farm’s chief income was primarily from dairy cattle.  He also cultivated alfalfa and tobacco.

Although given a choice of what college to attend, all the children “yielded to Mrs. Harrell’s persuasion to attend Appalachian State Teachers College,” as ASU was then called, and each sibling graduated with a degree in education.  Appalachian was the preferred option because it was “not far away and they would have a better opportunity to come home on holidays.”  Mrs. Harrell also admired Dr. B.B. Dougherty, who with his brother D.D. Dougherty began Appalachian Training School in Boone.   Dr. Dougherty was not only a source of encouragement for the Harrell children, he also saw they had financial assistance “when crops failed and there wasn’t enough money to meet college expenses.”

“It takes people with a purpose to send seven children to college with the income from a mountain farm,” wrote Tillie Brooks, but each of those children was accustomed to hard work growing up in a “modest but industrious farm family” and helped to support themselves during their college years.  They had also been raised in the church, the family being members of the Pleasant Grove Church of the Brethren near their farm.  “My husband and I agreed that we would rather our children had good character than anything else,” Mrs. Harrell proclaimed.   She and her husband are buried in the church cemetery.

All the Harrell children spent at least part of their careers in education.  At the time of the article, 1959, Helen taught in Tipton Hill and Bruce in Bakersville, Mildred and Edna in Ashe County, NC, Juanita in Moore County, NC, and Carol in Lee County, NC.  A.D. taught and coached at Tipton Hill High School before he took up dairy farming full time after his father’s death.

Arizona Byrd Harrell, mother of seven college graduates, had spent many long hours, “planting tobacco, tending corn, shocking hay, tying oats, and helping her husband mind sheep or the dairy herd.”  Despite the hard work and the financial burden, she stated she had just one regret as she saw Carol graduate in 1959, marking 36 years since her oldest, Helen, had entered first grade.  She was sorry only that she didn’t “have another child to send.”  In fact, she said she planned to choose a child at the orphanage in Banner Elk and help him or her finish school and go on to college.