While there is no doubt that the courthouse is home to history, it is also the residence of a restless spirit. Over the years, the courthouse ghost has been known to speak to courthouse workers, open doors, descend up and down stairs, and wander throughout the building. In the November 22,1995 edition of the Mitchell New-Journal, district judge Bill Leavell recalled his encounters of the ghost. In his own words, the first experience came on a Sunday afternoon. “I was up here one Sunday afternoon, and I heard a door slam. I went to see if someone was here. I looked through the whole building, and no one was here. I thought it might have been a draft, but all the windows were closed. I couldn’t figure out why that door had slammed.”

Judge Leavell’s second experience came during a trial. “I was reading the jury instructions. I was about halfway through when I heard someone say, ‘Objection!’ It’s really not proper to object during jury instruction, so I looked out to see who had said it. Nobody had said it. It was really odd. I didn’t recognize the voice, just out of nowhere. I couldn’t tell whether it was a man’s voice or a woman’s voice.”

Longtime Clerk of Court Butch Woody recalled hearing the Ghost speak to her. “Now I don’t remember when I first started hearing it. All it says is, ‘Butch,’ and I can’t distinguish if it’s a male or female voice. At first I thought the other girls were calling me, and I’d say ‘What?’and look around. I don’t know if I do or don’t believe in ghosts, but someone is calling my name, and I don’t hear it anywhere but in this courthouse.”

Sheriff Vernon Bishop reported hearing the Ghost while working late one night. “I was in here at 10 o’ clock one night. I heard someone walk down the back steps in the building. I went out to see who it was, and there was no one there. There wasn’t anybody in this building. And that’s the truth.”

Windle Young also heard the Ghost while working late at night. “Back when I worked at night, I’d hear a door slam and then I’d wait for somebody to come in. At three or four in the morning, it’d slam. I’d hear steps and wait for it to continue, but nothing.”

Kay Woody was the only one to actually lay eyes on the Ghost. “As I was walking down the hall, in the second office, I saw a man standing there at one of the file cabinets. I went by, then thought, ‘Who was that?’ I backed up, and he was gone. I circled through all the offices and there was nothing, no one.” She claimed what she saw wore a white shirt and gray pants. 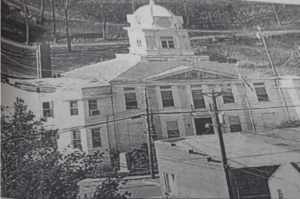 No one knows who or what the Courthouse Ghost is. It is true that many associated with the courthouse over the last century have died untimely deaths, leading to endless possibilities of the identity of the spirit. Perhaps one day the Ghost will finally find what it is seeking and will receive its long waited eternal rest.