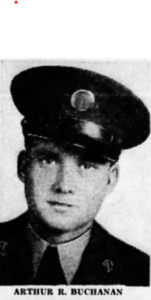 Speaking of Ray Buchanan, folks will say admiringly with a shudder, “Oh, yes, he was a survivor of that awful Bataan Death March.” This does not come close to what 17-year-old Arthur Ray endured for 3 and a half incredibly brutal years.

Ray was born in the Clarissa Community on Cane Creek as the youngest son of James Blaine and Dora L Buchanan on 12 June 1922. He had 4 brothers and 4 sisters and attended Roan Mountain school.

He joined the Army in 1940 at age 17 and was assigned to the 8th Bomb Squadron of the 3rd Bomb Group, Savannah, Georgia. In October 1941 he volunteered for service overseas and was promoted and transferred to the 27th Bomb Group of the 91st Squadron. He left Savanna on the USS President Coolidge on 21 October, arrived at Pier 7, Manila on 20 November, and set up in Fort William McKinley.

A massive 14th Japanese Army attacked the Philippines on 9 December two days after Pearl Harbor. The ground echelon of the 27th still in the Philippines was evacuated south from Luzon on 25 December to the Bataan Peninsula, arriving to form the 2nd Battalion (27th Bombardment Group) Provisional Infantry Regiment (Air Corp).

For 120 days and despite a lack of supplies, American and Filipino forces managed to fight the Japanese, engaging them initially in a fighting retreat southward. Much to the displeasure of General McArthur, on 9 April Major General Edward King Jr., realizing the futility of his position, surrendered to Colonel Mootoo Nakyama of the 14th Japanese Army.

Ray, suffering from shrapnel and a rife shot to the leg, was among a group of soldiers who tried to escape to the hills. Apparently, with the idea to join the Filipino guerilla fighters; however, most of those, including Ray, were captured and put in with 10,000 other Americans for the march north.

After the surrender, Americans and Filipinos were marched, regardless of their condition, practically without food or water, in successive groups ranging from about 500 to 1,500 to San Fernando. The men walked for six days between 65 and 140 miles.

The “Code of the Warrior,” according to Japanese tradition, meant fighting to the death; therefore, they considered those who surrendered to be cowards and treated them accordingly. During this “Death March” many were forced to go barefoot and hatless over the hot rocky roads. Some were fed one time with a saucer of rice and many were decapitated, their heads put on bayonets, and paraded in front of the prisoners. The men endured continuous harassment, stopping occasionally in barbed wire enclosures with no toilet facilities and hardly room to sit.

At San Ferando, Ray along with others in groups of at least 100 were put into box cars each with a capacity of only 25-50 and moved to Capiz. Then in columns of 4 they were marched to Camp O’Donnell where over 2,000 died. There he remained from 17 April until 6 June 1942 when they were moved to Camp Cabanatuan which had a death rate of over 50/day, often with bodies being left lying in the hot sun.

At both camps the prisoners were forced to work; however, in May of 1942 only 20 of every company of 200 were well enough to do work of any sort. Ray worked in the corn fields, escaped, was recaptured, and tortured.

Beginning in September 1942, many prisoners, able to work, were moved from the Philippines to Japan. Ray was moved to the transitional Bilibid Prison and on 23 July 1943, he was put on the “hell ship” Clyde Maru. The men were packed in the wooden kennel-like structures on the lower ‘tween’ deck of the freighter and arrived at Moji, Japan 15 days later on 10 August. Ray was taken first to Camp Fukuoka #17. Later he was transferred to the Niigata camp were prisoners were forced to work. Wearing only a G-string, Ray worked 14/15-hour days barefooted in the Mitsui coal mine. A cave-in covered him for 3 days, he recovered, but had back and leg problems the rest of his life. Here he stayed for two years until the Japanese surrender and American forces liberated the prisoners.

Fortunately for Ray, the city of Niigata was one of four possible targets for the bomb that was dropped on Nagasaki; however, weather and distance considerations cancelled that site.

Liberated, on 5 September 1945 he was taken by train to Yokohama and there on the docks he registered on 9 September to return to the states by way of the hospital ship, Missouri. Ray came to Moore General Hospital in Swannanoa on 28 October 1945.

After 3 and a half years, Ray had a broken left hand, shrapnel in his left leg, and a broken left arm. He also is reported to have been the victim of the sadistic and incompetent medical officer, 2nd Lt. Hiroshi Fujii.

Surviving the Death March was only the beginning and this very brief chronology does not come close to describing the horrors that Ray witnessed, endured, and overcame as he turned 21. In June 1947, he married Mary Will Stamey who died in 1986 and then married Emma Lee Staton. He died 11 February 1988 at the age of 66 and is buried in the Cane Creek Cemetery.

Thanks especially to Joyce Boone’s 1988 articles in the News-Journal and daughter Janie Campbell for her files and insights. There is so much more to his story.