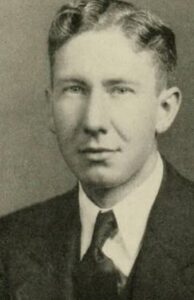 After graduating from Bowman High School, he went to Akron, Ohio where he worked for a time in the Goodyear Tire and Rubber Company factory. Apparently, he preferred pursuing an academic path and entered Appalachian State Teachers College about 1934 and completed a B.S. degree with a double major in History and English. He excelled and received academic honors as well as being a member of the Debate Team, International Relations Club, Alpha Sigma Gamma Honor Society, Forensic Society, YMCA, National Economics Club, Social Scient Club, and was President during his Senior year.

He came back home and taught first in the one-room Roan Mountain School, where he had attended. He then taught at the Altapass School in Mitchell County, Dobson School in Surry County, Maxton in Scotland County, back home to Tipton Hill High, and finally to Bowman High. Obviously, Oliver was engaged in community affairs as indicated by his winning a men’s beauty pageant sponsored by the American Legion post and Social Service committee in Laurinburg 7 November 1938 while teaching 7th Grade at Maxton. At Bowman he took a role in the faculty play, coached the school’s winning debate team, and was a founding member of the Bakersville Junior Civic Club.

When the US entered World War II in 1941, Oliver believed that it was his duty to serve and left teaching and enlisted in the Army 17 February 1942. Most likely, he completed basic training at Fort Jackson, South Carolina. Apparently, he was assigned or volunteered to serve in the 52nd Chemical Processing Company and was stationed first at Camp Bowie, near Brownwood., Texas. There, during a rest period after an overnight march he composed “Iris by the Roadside” which was published by the Moody Monthly in July 1942.

IRIS BY THE ROADSIDE

In the cool quiet shade

By the road, where we marched

In grime and sweat and dust,

And shed its beauty on a world enslaved by hate.

And three in weeping mood it held,

As if to pray for the folly of man.

And poised in gesture of unbounded faith,

Unheeded, you plead with a hating, striving world

To make way for the way of God.

He remained in Texas until 10 August 1942, then to New York, NY on 13 August until 21 September when the Company moved to Camp Pickett, VA where he remained stationed until 22 April 1943.

It is not known at this time when Oliver first met Viola Elizabeth Mann of Pittsboro; however, both were graduates of Appalachian State Teachers College and were teaching in nearby schools in 1938. Oliver was teaching 7th grade in Maxton, N.C. and Viola was an elementary school teacher at Gibson about 17 miles away.

However, during his time at Camp Pickett, Oliver took a leave and came down to Pittsboro to marry Viola 22 December 1942. After a honeymoon in the WNC mountains, Oliver returned to Camp Picket and Viola to Gibson, NC.

Although the United States did not use chemical weapons during the war, the military was constantly aware of the potential for others to do so. His Company’s specific responsibility was to treat uniforms, shoes, and other clothing items to be chemically resistant or at least tolerant.

Oliver believed that he was called to the ministry before he entered the service and now retired, on 3 February 1946 he was ordained in a service conducted by the Reverend Julius Henline in the Roan Mountain Baptist Church. This is the church for which Oliver’s Third Great Grandfather, Moses Young and his wife Elizabeth sold the land to William Burleson and Ephram Buchanan, Trustees “for the purpose of a Baptist Meeting house” in 1874.

The Rev. Young immediately entered the Southern Baptist Theological Seminary in Louisville, Kentucky where he earned the Bachelor of Divinity degree after having spent one summer at the Divinity School of Duke University.

He spent one year as associational missionary in the Mitchell and Avery Associations before being called to the Bakersville Baptist Church, his first pastorate, in September of 1949 where he remained for four years. He was active in the community with membership in the Lions Club and Bakersville Lodge No. 357.

Next, he was called to Woodlawn Baptist Church in Charlotte 1 March 1954 and remained for eight years. During this time, he served as president of the Baptist Pastor’s Conference of Charlotte and Mecklenburg County, Secretary of the Mecklenburg Associational Board, Program Chairman of the Mecklenburg Ministerial Association and in numerous other community activities.

Throughout his ministry, Oliver conducted devotional services on television and radio, preached   in mission centers, taught at youth camps and retreats, visited in hospitals and prisons, counseled with individuals, and taught Seminary Extension classes.

Health issues forced him to leave the ministry yet in the fall of 1962 he enrolled at Appalachian State Teachers College to earn his Master’s degree in English in order to teach in a church related college. This he did not realize but continued to serve as an interim and supply pastor; moderator of the Three Forks Baptist Association; Director of the Fellowship of Christian Athletes at ASTC for a year; and, as active as his physical condition would allow, participated in programs of the First Baptist Church in Boone.

The Reverend James Oliver Young died 19 December 1967 and was laid to rest among his ancestors in the Green Young Cemetery in Mitchell County. Viola rests there as well, following him 14 April 2012.

The writer is grateful to Viola Mann Young for making sure that the basic transcript of Oliver’s book, A Baptist Looks Back, was published in 1968 from which a great deal of the information here was gleaned. The book also is the best available history of the Baptist Church in Mitchell County. Also, to Mary Lee Barron whose notes, files, and remembrances of one of her most favorite and loved cousins added to both the book and this article.