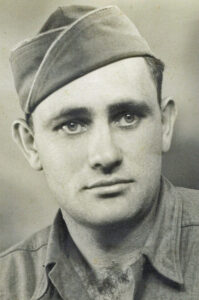 Veterans Day is a holiday created to celebrate our real-life heroes.  When we think of heroes, they often seem larger than life and we tend to forget they are real people. One real-life hero from our very own Mitchell County was WWII Veteran, William Gibbs Honeycutt Jr, or “Dub” as he was known to many.  Honeycutt was the first man drafted in World War II from Mitchell County and served from before the war started to the very end in 1945.

W.G. was born on July 13th, 1915 to William Gibbs Honeycutt Sr. and Birdie Honeycutt in the community of Honeycutt and preceded two sisters, Madeline and Doris Honeycutt.  The area labeled “Honeycutt, NC” was located on Hwy 226 between Harrell Hill Road and Pine Root Branch south of Buladean and named after W.G. Honeycutt Sr..

The Mitchell County that W.G. grew up in was growing rapidly thanks to our proximity to the railroad and direct access to fruitful mines.  W.G. was a soft-spoken man who didn’t say much about his childhood however, he did fondly reminisce about searching for the silver mine on Unaka Mountain and his love of animals, specifically, horses.  During his teenage years, W.G. also worked in the CCC camps run by the US Army during the Great Depression. The CCC’s paid young men from the ages of 18-25 to plant trees and build recreational areas in our National Parks and Forests.  W.G often commented, “the CCC camps helped get me ready for the Army.”

Although America had drafted men in the Civil War and WWI, for the most part our military had always been a volunteer force.  In response to the war clouds gathering over Europe in the late 1930s and pressure from Pres. Roosevelt, Congress enacted the first-ever US peacetime draft in 1940 by one vote.  The Selective Service and Training Act required all men between the ages of 21 and 45 to register for the draft. If selected, you were required to serve in the military for one year.  At 25, W.G. was one of the 10 million men who were selected to fight for our country.  In late 1941 with his year almost done, WG was literally counting the days until he was discharged by marking X’s on a calendar beside his cot.  He was stationed in Texas with less than a month to go, but things changed drastically from that time forward when Japan bombed Pearl Harbor.  After getting that news, he and many of the other young men hitch-hiked home to see their families, knowing they would soon be going overseas.  He especially wanted to be with his fiancé, Pearl Whitson, who was working at the Tennessee Eastman in Kingsport, TN.  Pearl continued working there during the war and until they were married in 1945.  Like many men from the Buladean area through the war, W.G. made it to the train station at Forbes which was just below the Red Hill Bridge, and hitchhiked home for what would be the last time to visit his family until the late fall of 1945.

W.G. soon returned to the Army and embarked from New York, NY, on the Queen Elizabeth, an ocean liner that secretly transported soldiers and landed in England on June 30, 1942.  From there he sailed for North Africa in October of 1942 to take part in the first offensive action against the Germans.  During his service he was given credit for five amphibious assaults and he participated in nine campaigns including North Africa, Sicily, Salerno, Anzio, Rome, Southern France, the Rhineland and Central Europe.  His unit helped supply communications between the 64th Fighter Wing and the 45th Infantry Division. His most vivid memories of his military service centered around the Anzio Campaign and his many weeks spent there under intense enemy fire from January to May 1944. When telling his cousin, Loyd Bailey about the war in Italy, Mr. Honeycutt mentioned that one of his friends was shot to pieces while sitting beside him in a Jeep.

He was personally given a commendation by Brigadier General J. R. Hawkins, the commanding officer of the 64th Fighter Wing. The citation reads, “For exemplary behavior, display of courage, and devotion to duty during the period of 22 January to 29 February. The manner in which you have performed your duties, at the Anzio and Nettuno beach-head, while all of our installation, roads, and bivouac areas were subjected to intense artillery fire and bombing attacks is worthy of the highest praise. The courage you have shown has contributed much to the success of this operation.” From reading this you can tell that Mr. Honeycutt was a courageous and highly respected man who served his country with distinction.

Honeycutt departed for the United States on September 19, 1945 after serving for 3 years, 2 months and 17 days in the European Theater of Operations with the 439th and was discharged at Fort Bragg, NC.  His Service ribbons worn included the Presidential Unit Citation, Good Conduct Medal, European Campaign Medal with nine Bronze Service Stars and one Bronze arrowhead.

After WWII, Mr. Honeycutt lived a quiet, simple life and married his fiancé, Pearl Whitson on the 29th of November, 1945. They soon welcomed two new members to their family, daughters Barbara and Eloise.  For a short time, Honeycutt worked at Kodak Eastman in Kingsport, Tennessee and Maryland however, he lived the bulk of his post-war years farming in Buladean under the shadow of Roan Mountain.  He loved animals, especially horses and in later years had a horse named Fanny, which was one of his pride and joys.  Fanny and Mr. Honeycutt did lots of farming together, as she helped him disk the soil. The horse was very gentle, and he often let his grandchildren take rides on the horse.  He was a loving father, husband, grandfather, cousin, and friend, and rarely let his war experiences interfere with his daily life.

Like many combat veterans, Mr. Honeycutt suffered from PTSD. Though he controlled it extremely well, the things he saw during WWII lived in his mind for the rest of his life.  Perhaps one of his most harrowing memories is the liberation of the Concentration Camp at Dachau.  It was hard for Mr. Honeycutt to share his times in battle and he seldom told stories. He almost never spoke of war memories with his friends and family but when he did, they could see him struggling to hold back tears and emotions.  Mr. Honeycutt left his time at war locked not only in his head, but in his footlocker, that remained untouched and stowed away up until shortly before his passing. When the chest was finally opened, it revealed many records, images, and patches that were filled with information about this part of his untold life away from home. Suddenly, this secret door of Mr.Honeycutt’s life was open to his family.

William G. Honeycutt died on a Saturday morning, the 3rd of May, 2003 at the Mountain Home VA Medical Center, in Johnson City, Tennessee at 87 years of age. Like a superhero with a secret identity, Mr. Honeycutt lived a life after war in silence, but had a legacy that spoke louder than ten thousand voices, which will live on forever. His daughter Barbara Jenkins summed up her father with these words. “We have no idea of the pain and suffering our sons and daughters, mothers and fathers experienced both during the time of war and for many years afterward. Daddy was VERY proud of his service but couldn’t talk about the traumatic events that took place during his war years, while we were young.  He would tell a lot of the funny escapades he & his buddies got into but it was not until the last few years of his life that he began telling us about seeing his best friend step on a landmine right in front of him and many other such tragic events.  He wanted to tell everyone about his years overseas, but would begin crying every time, even though this was more than 50 years after he lived it. He kept all of these painful images deep inside him but they were still there, doing their damage to his peace of mind. The last two years of his life, his memory began to fail and thankfully so did these heartbreaking memories. We always felt it was by God’s Grace that he made it home to Mitchell County and was blessed to raise a family he loved so much. This was why he & so many others were willing to fight, to be wounded both physically & mentally and to even die for the rest of us. It was because of their Great Love for the people and the land we call Home, the United States of America.”

Mitchell County is very proud to claim Mr. William G. Honeycutt Jr. as one of its own, and we would like to take this Veterans Day to remember this wonderful man and pay our deepest gratitude to the sacrifices he made for our country.