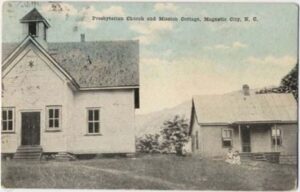 The Buladean Presbyterian Church (built in 1922), and Mission Cottage in Magnetic City. The church was instrumental in educating the children of the community. The Buladean Community was called Magnetic City because of the large deposits of magnetic iron ore. It was also called Wilder’s Forge. That ​name comes from Union General Thomas Wilder, the builder of the Cloudland Hotel on nearby Roan Mountain, who made his fortune in iron and had a forge in the community.

In the Buladean community, the Charles Garland (1873-1920) family helped secure the first teachers and home mission workers from the Holston Presbytery. They were Miss Osma Newton and Miss Grace Farr. In 1924, the citizens of Mitchell County passed a tax to help with educating the children of the county. Miss Ann Hatton was 21 years old at the time and teaching fifth grade in Clinton, South Carolina. One of Hatton’s trusted advisors, Dr. D.J. Braum, Professor of Bible at Presbyterian College, informed her of a first of its kind, county paid teacher position at an outpost mission of the Holston Presbytery in Buladean, North Carolina. A teacher was needed to teach “high school” for the more advanced students. (In 1921 there was only one teacher that was properly certified to teach high school courses. That would change dramatically in the proceeding years.) Although Miss Hatton was to be married to Mr. William Lewis in September of 1925, she jumped at the adventurous opportunity. She agreed to a salary of $125 for six months. After everything was set in place, Ann Hatton boarded the Clinchfield Railroad in Spartanburg, and made her way to Johnson City. After spending the night in Johnson City, she then caught the narrow-gauge East Tennessee and Western North Carolina line on “Tweetsie”. From Johnson City to Roan Mountain, Tennessee she would gaze at “some of the most magnificent scenery I have ever seen.” A gentleman named Mr. Grey would meet her at the depot in Roan Mountain and drive her to his house where the road ended in the Cove Creek Community (located above the present day Roan Mountain State Park). From there, her adventure would begin in earnest with a combination of a hike and horseback ride for about seven miles across a spur of the Roan Mountain to the beautiful valley of Buladean. (The only problem with this situation was that there were four people and only one horse. She had brought with her a suitcase, a wardrobe trunk, and a big wooden packing crate filled with pillows, sheets, blankets, and quilts. There was also a treasured wooden box of chalk – which was not needed immediately because there was no chalkboard.) Miss Hatton herself said seeing the valley “was love at first sight.”

The high school in which she would be teaching was across the road from the Buladean Presbyterian Church in a recently vacated store building near the home of the Harrison Hill Family. Upon her arrival, she would meet Mrs. Van deVere from Kingsport and Mary Armstrong from Rogersville, Tennessee. They were each paid $30 a month and taught the younger children, splitting grades first through seventh, in each end of the Presbyterian Church, with a wood-burning stove in the middle. The old stove was set in a sandbox for safety, and the stovepipe ran straight up through the roof. They would all live in the mission house (shown in the accompanying picture).

Her first task upon arrival was to ride the 11 miles on muleback to Bakersville to meet with Mitchell County School Superintendent Jason Deyton. While there she secured geography, reading, history, grammar, and arithmetic texts for her students. She also pleaded for a high school building to be built in Buladean. After an overnight stay, she traveled the eleven miles back to Buladean on muleback enduring a horrific storm that forced them to take refuge in a barn. 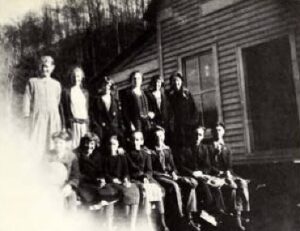 The “new” Buladean High School was located across the road from the Presbyterian Church in a converted old store building. The porch served two purposes – as porch for the building and as a bridge across the little stream that ran right in front of the store. Miss Hatton would have 37 enrolled students, about 20 of which came regularly. She is shown above with some of the students in front of the old store/school building.

After settling into the cottage, which was crowded now, Miss Hatton quickly saw the generosity of the community. She was graciously supplied with fresh vegetables, apples, potatoes, onions, cabbage and fresh meat when a cow or pig was butchered, and chickens were plentiful. A Primitive Baptist preacher in the community built a nice little addition to the cottage for the three teachers. Miss Hatton, whose family also sent her items of necessity from South Carolina, made a comfortable home there for six months while teaching in Buladean. One of her uncles even provided her with a 38 Smith and Wesson pistol with a good amount of bullets. While there was absolutely no need for a gun, Miss Hatton was challenged often – challenged to a shooting match! She was a proficient marksman – or markswoman. “Pardon me for bragging, but I was challenged on several occasions to target shoot and I never missed. My uncles had taught me well to sight and take aim and I could always knock off the tiny piece of broken china or small rock placed on a fence post as a target,” she said. 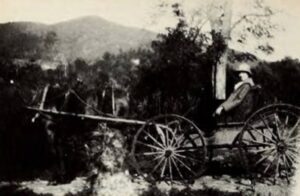 Miss Ann Hatton arrives by buggy in Buladean in August 1924. She would be the first county-paid teacher in Mitchell County in the new one-teacher high school.

The first day she walked into the classroom, the county had placed twenty-four double desks in the middle of the old store building. There was a table for the teacher and an abundance of empty shelves, inside the shell of the repurposed edifice. In an article Mrs. Ann E. Hatton Lewis wrote for The State magazine in 1985, the interior of the building is not what she most remembers. The students who came that day are her greatest memory. She especially remembers the boys, some of whom were older and certainly bigger than her, dressed in their cleanest blue overalls and blue shirts. She knew that if they wanted they could throw her in the rocky-bottomed little creek that ran right outside the door if they didn’t like her. However, there was never a discipline problem. All of them were most “polite and respectful” of me as the teacher “and bent on getting an education,” she said. She reluctantly let the students set up the rules for the classroom. The students were very disciplined in their decision making which impressed Miss Hatton. No talking, no passing notes, no smoking, no this, no that – finally someone asked “what are you going to do to anyone who breaks a rule?” “Make him grub a stump,” was one of the first suggestions. (Evidently they didn’t expect a girl to break a rule.) Miss Hatton had no clue what “grubbing a stump” meant. The students quickly explained. It wasn’t until after Christmas that a rule was broken. Someone passed a note. Therefore someone had to grub a stump – an arduous task. After much thought and discussion, Miss Hatton and the students changed the rule. She suggested that she would very much like to have some of the rocks removed from the path that she walked every day to get to the school. The path was made very smooth for me, she would later write.

Ms. Ann E. Hatton left Buladean after her six month employment was up, and would marry her fiance in September of 1925. However, Buladean never left her. She had received as much experience and education as her students. While researching information about Miss Ann Hatton, Newton Farr Garland, M.D. had written in his memoirs that  “Miss Ann E. Hatton came to Buladean as the first paid school teacher. She was real pretty and everybody loved her. She would give dramatic readings of “Casey at the Bat” and “Pretty Bobby Shaftoe” to Wednesday night gatherings in her Buladean school or at a church. Miss Hatton helped to get me and my brother, Fred, and one year before that my sisters, Hannah and Estalene, into the Thornwell Orphanage, in Clinton, South Carolina, which was her home town.” They had gone there to further their education. Newton Farr Garland and Fred Garland stayed there until they received their college degrees. 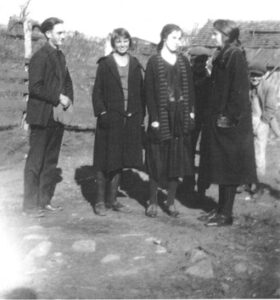 Mrs. Ann Hatton Lewis went on to raise a family and develop quite a career for herself in South Carolina and Georgia. After moving to Whitmire, she founded and edited a weekly newspaper, The Whitmire News, and was a correspondent for The Spartanburg Herald-Journal and The Greenville News. She was instrumental in the founding of the Whitmire Public Library. In 1989 she was grand marshal of the summer festival parade in Whitmire. In 1952, she moved to Atlanta, where she founded and edited Georgia Magazine and later Georgia Life. She was the recipient of many awards for contributions to the literary and civic life of Georgia, including honorary resolutions by the state legislature in 1975 and the proclamation by Gov. George Busbee of “Ann E. Lewis Day″ in Georgia in March 1979. She was designated Atlanta’s “Woman of the Year in Business″ in 1962 and received the Governor’s Award in the Humanities for 1987. In 1989 she was presented the Career Achievement Award by the Columbia College Alumnae Association.

In 1981, she would return to Buladean for a reunion with some of her former students. Tom Hodge wrote in the Johnson City Press that year that “Mrs. Lennie Bennett Hughes and Mrs. Hannah Garland Miller, at the reunion, returned to their teacher three (handmade) quilts. Their handiwork was much admired. Clarence Ledford presented her with a box filled with homegrown apples, cucumbers, tomatoes, and grapes.” Another article about the occasion was reported in the Atlanta Constitution. Mrs. (Hatton) Lewis’s former pupils remembered her with love and gratitude, showering her with homemade goodies. She remembers them with equal affection and appreciation.” Having reflected upon her time in Buladean, she remarked “These boys and girls were coming to school to learn. And that does make a difference.”

Mrs. Ann Hatton Lewis passed away on January 25, 1997 at the age of 93. Her obituary highlighted the fact, in addition to all other accomplishments, that she was “the first public school teacher of Mitchell County, N.C., serving the Buladean community.”

Information for this article was gathered from the North Carolina Gazetteer, The State Magazine, The Johnson City Press, The Atlanta Constitution, The History of the Garland Family in America by Paul Garland, The Memoirs of Newton Farr Garland, M.D. Photos from The State Magazine and the collections of the Mitchell County Historical Society and Chris Hollifield.