Many Mitchell County natives have gone on to successful lives in far-away lands, but few are held in as great esteem in their adopted homes as Dr. Nelson Gales Blalock of Walla Walla, Washington. 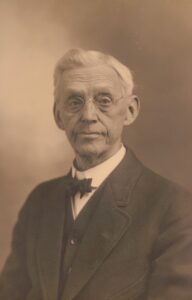 Dr. Blalock was born in the Beaver Creek area of Spruce Pine February 17, 1836, the son of Jesse and Eura Lipps Blalock and grandson of John Blalock who fought in Virginia and was at the Battle of Yorktown. John settled in Beaver Creek after the Revolutionary War, and N.G. and his family lived nearby. Blalock passed away March 14, 1913 and is buried in the Mountain View Cemetery in Walla Walla. At his death, he was labeled “the foremost citizen of the State of Washington.”

He was a skilled student and attended school in the Spruce Pine area, though the school’s location is unknown. Blalock married Panthea A. Durham (1836-1864) in Rutherford County, NC, in 1858.  Blalock had aspirations of being a doctor, and he left Mitchell County for Philadelphia and attended the Jefferson Medical College. He graduated with his M.D. degree in March 1861.

On the eve of the Civil War, he set out to establish his medical practice in Macon County, Illinois, settling his family in Mount Zion. But the war caused too many disruptions, so Blalock entered into the 115th Illinois Volunteers as a surgeon, where he served with distinction. During the war, however, Blalock’s wife and their 2 daughters died, and his health failed, leading him to leave the army before the war’s end. Returning to Mount Zion, he resumed his medical practice and care of his sons Yancey and Plato. He re-married in 1865, to Maria E. Greenfield (1849-1885), and started a second family, a son Willie and daughters Lydia, May, and Rose.  Of his 8 children, only Yancey and Rose grew to adulthood.

In 1873, Blalock heeded the call of the West with other Illinois residents and set out for Washington state, settling in Walla Walla and setting up a medical practice, where he delivered thousands of babies and performed an average of one surgical operation a day. He was also an early user of x-ray equipment in his practice and installed the first telephones in the State of Washington in his office.

But that was not all. Blalock served on the local school board, as a trustee of Whitman College, and as mayor of Walla Walla for several terms. He also served as a delegate to the constitutional convention for the State of Washington.

He had an interest in agriculture and, working with others to bring water to the dry land via irrigation from the Columbia and Snake Rivers, helped start commercial agriculture in the region. He established Blalock Orchards on 5,000 acres, producing fruit, vegetables, and wheat. Today, the orchard land is home to an upper-class housing development in Walla Walla.

Blalock passed away March 14, 1913 and is buried in the Mountain View Cemetery in Walla Walla. At his death, he was labeled “the foremost citizen of the State of Washington.”

While he never returned to Mitchell County for a significant period of time, Blalock is still remembered in Walla Walla. He was recently honored on July 20, 2019 when the Fort Walla Walla Museum presented a living history program celebrating his life and impact on the southeastern Washington region.

N.G. Blalock had an uncle, Tilmon, who played a significant role in the beginnings of Mitchell County, but that’s a story for another day!