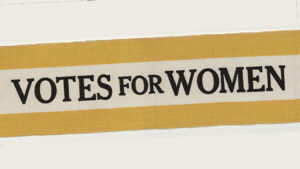 North Carolina women began their efforts to be recognized as full participants in the political process in 1863 at the convention to write a constitution for the State with no positive results.

In 1884, the National Woman Suffrage Association held a convention in Washington, DC and Margaret Richardson attended as the first NC representative to a national conference.

The first woman suffrage organization in the State began at a public meeting in November 1894 at the Buncombe County Courthouse in Asheville led by Helen Morris Lewis. With Mayor Patton as an advocate, the North Carolina Equal Suffrage Association was formed electing Ms. Lewis as president. She gave suffrage speeches in several mountain towns “with large audiences and good results.”

In 1897 the first woman suffrage bill in NC was introduced by Senator James Lee Hyatt from Burnsville. It was referred to the committee for insane asylums and died.

Likely discouraged, suffrage efforts lay dormant until July 1913 when a group renewed the effort at Morganton. The North Carolina Equal Suffrage League was organized, chartered by the State, had four Clubs including the Bakersville Equal Suffrage Club, and met in Charlotte in 1914.

The leadership of the Bakersville Club was listed in the Raleigh News and Observer 25 April 1915. The writer called attention to “prominent woman suffragists in the state as recognized by the National Congressional Union” including the officers of the Bakersville Equal Suffrage Club: Mrs. Wiley L. Lambert, President; Miss. Estelle Gudger, Secretary; and Mrs. Birdie Y. Prestwood, Treasurer.

It is likely that the women in Bakersville were encouraged by Ella Clapp Thompson. Ella Clapp was born shortly after her parents, Elisha Bogue and Alice Jane Conley Clapp moved from Knoxville, Tennessee in 1870. Her father and partner John Graves Heap were the impetus for large scale mica mining in the area which made them rich. Ella grew up in the house built by him which remains standing across from the Bakersville United Methodist Church. She moved to DC and married Edwin St. Clair Thompson.

Ella began her lifelong commitment to woman suffrage when she and another North Carolinian, Myrtle Bunn of Wilson, attended the October 1911 Convention of the National American Woman Suffrage Association at Louisville, Kentucky. Both women worked in DC government yet maintained strong contacts back home in Carolina.

In March 1913, she listed her home as Bakersville and joined again by Myrtle, became representatives of North Carolina to the convention and parade of the National American Woman Suffrage Association in DC. It was the first large, organized march on Washington for political purposes.

Ella organized the North Carolina Chapter of the Congressional Union for Woman Suffrage in 1914 of which Myrtle Bunn was secretary. From then until 1920, Ella was deeply involved nationally in suffrage issues with the distinct purpose of getting the Susan B. Anthony amendment passed through congress.

After the death of her husband in 1933, Ella came back to Bakersville and built a house she named Casa del Sol which remains a residence. She died in 1944 of pneumonia in Asheville, services were held in Casa del Sol on December 18, she was cremated, and her ashes taken to DC to remain near Edwin.

Lilly Lambert was born in Clarksville, Davie County in 1866 to Haruan and Elizabeth Critz. She became the wife of attorney and NC Senator Wiley L. Lambert originally from Ashe County. They were married in 1893 and living in Bakersville in 1900. She was 47 when the Club began. Little more is known about her except that census records indicate that she worked at “keeping house” with other records indicating she moved to Winston Salem after the death of her husband in 1929 where she is buried.

was born 14 July 1888 to John Wilson and Celia J. Martin Gudger at their Bakersville home known as the Gudger House. Originally from Buncombe County, John was a Captain in the Civil War and Celia was the daughter of the Methodist Minister. Estelle’s sister, Mary Geneva, died of consumption at 23 in 1904.

Estelle was 25 when the club was formed. She married Carleton Miller in 1918 who was a professor of chemistry at North Carolina State University, yet soon after he accepted a position at the University of Delaware. He died in 1921 and Estelle and her daughter Mary moved back to live in the Gudger House. She and Mary rest in the Bakersville Historic Cemetery.

Mollie Birdie Young was born 28 Oct 1877 to Reuben Jasper Jr. and Nancy Matilda Wiseman Young in the Young Cove on Cane Creek. She and her family moved to Bakersville when her father purchased the Penland Hotel and property from Robert Penland in 1887.

According to family tradition, when Birdie was 16, Dr. Prestwood (31) rode up to the renamed Young Hotel one evening, she left dinner, got on the horse behind him, rode off, and got married. Birdie became pregnant and twin girls were born and died 6 May 1896. On 20 July 1899, resulting from “divers disputes and unhappy differences” between the parties who were “already separated,” she obtained a divorce. Robert died 3 August 1899. Birdie was 36 when she became secretary of the club. She married Frank Pritchard in 1917 and rests beside her twin daughters in the Bakersville Penland Cemetery.

Woman suffrage appeared to have a lot of support in North Carolina; however, claiming state’s rights as an excuse, on 17 August 1920, the North Carolina legislature defeated the measure by two votes. The Tennessee legislature passed it the next day and the amendment became law for the nation.