November Rain: Remembering the Flood of 1977 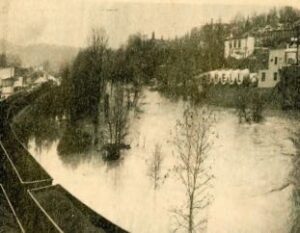 The North Toe River spilled over onto lower street in November 1977.

On November 6, 1977, the mountains of North Carolina saw one of the worst natural disasters to hit the area in nearly sixty-one years. On Friday, the 4th, heavy rain began to fall and continued throughout the weekend. A flash flood watch went into effect on Saturday. By Sunday the rainfall amounted to five to seven, and in some areas eleven inches of rain. According to the Asheville Citizen and Times, by the time the water subsided, “11 people were dead, hundreds were left homeless and damage to property ran into millions of dollars.”

The Tri-County News reported that the main damage throughout Mitchell County occurred where Cane Creek meets the Toe River. The flooding resulted in severe damage to several homes and other buildings. “The Department of Transportation’s report for Mitchell listed the following: six bridges washed out; N.C. 261 near Glen Ayre and in the Loafer’s Glory area suffered several heavy slides; state roads and bridges washed out or partially blocked are- 1211, 1160, 1223, 1106, 1143, 1139, 1137, 1343, 1338, 1309, and 1306.” Joe Young recollected the impact the flood had on the Buchanan and Young car dealership. According to Mr. Young over three feet of water landed inside the dealership, damaging over thirty cars. One brand new car washed away, down below the old mill near the Bakersville Fire Department. The following day, lots of people stopped by after church, grabbing mops and brooms to help clean and push the mud out. 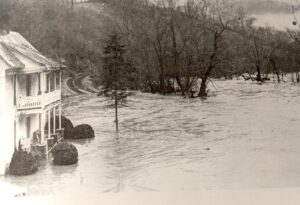 In the fall of 1999, Angela Bailey Burleson compiled an oral history regarding the 1977 flood. In her collection of interviews, Stokes Bailey recalled his memories of the flood: “I was working with the sheriff’s department during the ‘77 flood. I was an investigator with the sheriff’s department. The night the floods came I was on the second shift. I left Bakersville. It had started raining sometime in the afternoon and rained on up until Midnight. When I left to come home about midnight, the creek in Bakersville was up to just about flood stage at that time. About an hour later I got a call from the department and had to go back out and most of the town of Bakersville was under water. I spent all night, all the next day, and into the next night trying to get to different areas of the county to assist people.” 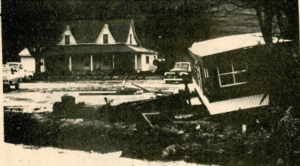 Marcella Tabor reflected on where she was on that November night: “I had gone to visit my sister over in Mars Hill that night and my husband woke me up, woke us all up, the next morning telling us that Bakersville was under water. I said, “You’re kidding” because we just don’t have floods like that up here. He said that no he wasn’t kidding. Most of the streets and most of the town was under water. There were houses completely filled with water.”
“When I got the news I decided I would try to come home. We came from Mars Hill to Burnsville and just the other side of Burnsville the main bridge was completely gone. They had had some major flooding in Burnsville, maybe worse than here in Bakersville. They had to go to a lot of people’s houses by boat and take food to them. I couldn’t get through over in Burnsville, so I had to turn around, go back to Mars Hill, back to Asheville, down to Marion and come up 221 from Marion. When I got to Marion, there were mobile homes that you could just see the tops of. The water was that high just this side of Marion coming up 221. Then when I went on around Asheville and to Marion, I think what stuck out was the great lake there which used to be land. And the mobile homes, some of them were turned over, some were sideways, some were almost completely covered with water. I came back to Bakersville and it was hard to believe what Bakersville looked like. It was just a mud hole. What really happened was that the dam or somewhat of a dam burst there just below Helen’s Drive In. When it burst then the water went on out of Bakersville more. The street was completely covered from this end of town to the other.”

The Asheville Citizen and Times detailed that “Gov. Jim Hunt and President Jimmy Carter took an immediate personal interest in the disaster and the plight of the victims.” In total, sixteen counties were designated by President Carter as disaster areas. These counties included Ashe, Avery, Buncombe, Burke, Caldwell, Catawba, Haywood, Henderson, Madison, McDowell, Mitchell, Polk, Rutherford, Watauga, Wilkes, and Yancey. Eventually Yancey was declared the number one disaster area of all sixteen counties. Mitchell County was more fortunate than its neighboring counties. The Tri-County News outlined that all of the main roads remained open. “Several rural roads are closed, but all points in the county are accessible by various routes according to Chief Deputy Larry Cox.” 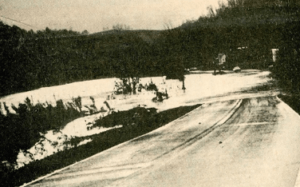 When the clouds finally lifted, the damage was clear. For many residents in the region, their lives had been turned completely upside down. In her interview, Mrs. Tabor described that the experience bothered her aunt so much that she refused to stay at home alone whenever it would rain. There is no doubt that rebuilding was a slow process for Mitchell County and the rest of western North Carolina. One night of turbulent rain left its impact on both the people and land in the region for years to come.