Robert G. Young Was an Educator of Merit 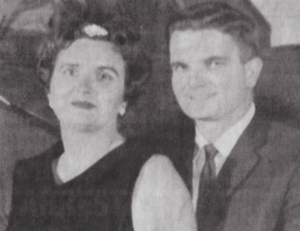 A 1943 graduate of Bowman High School, Young obtained his bachelor’s degree in education from Appalachian State Teacher’s College (now ASU), a master’s degree in administration, also from ASU, in 1955, and a vocational education degree from NC State University in 1971.  He worked for a time in Virginia as a fireman on the Clinchfield Railroad.

His first teaching job, according to a 1981 Asheville Citizen article by Elizabeth Hunter, was “in Davie County, where he coached and taught social studies.”  He left Mocksville and a winning football team to come back to Mitchell County in 1957 and taught social studies at Harris High.  He became principal there in 1963.  That year the Spruce Pine Jaycees awarded Young its Distinguished Service Award based on his “outstanding service to the community” during 1962; in particular, his “work with ‘dropouts’ was considered especially significant because Mitchell County has had no truant officer for many years” (Asheville Citizen-Times, 2/1/1963).  He was lauded as being “instrumental in persuading potential ‘dropouts’ to continue their high school work and <inducing> others to resume their schooling, some even after absences of as long as three years.”

Some folks told stories “about Mr. Young’s infamous paddle, commonly referred to as ‘the attitude adjuster.”  His usual approach to discipline was likely “matching the crime to a fitting consequence.”  Most often an “encourager” to not only students but also his faculty at Harris; he constantly urged them “to enhance their knowledge and job skills by attending college and/or obtaining additional vocational training” (Bell).

Young spent some of his summers off from teaching school as a park ranger at Mount Mitchell State Park according to a 2017 Mitchell News-Journal article.  He was an “avid fan of sports, field trips, and celebrations and often drove the school activity bus.”  Young’s talents also extended, we were told, to playing guitar not only with his brother Bill but also with the famous musician Chet Atkins.

Young was named “Principal of the Year” in 1976, following reaccreditation of Harris High School and just prior to consolidation of the county’s high schools; he advanced to competition for the state school principal award.  Young became Superintendent of Mitchell County on 6/1/1978.

Young’s announcement that he was retiring after more than 3 decades in education was made at the first meeting of the Mitchell County Board of Education in the school year 1981.  He continued to be involved in education even after his retirement by serving 16 years on the Mitchell County Board of Education and being first vice president of the North Carolina School Boards Association.  He was also a Trustee of Mayland Community College for 9 years.

On 10/31/1952, Robert G. Young married Betty Lee Berry (1931-2009), a senior at Appalachian State Teacher’s College; she was the daughter of Reid and Irma Fisher Berry.  Like Bob, Betty was also the great-grandchild of Greenberry Young.  Bob and Betty had 2 daughters, Bea Young Smith and Beth Young Stout.  Bob Young was reportedly “fond of saying that he was surrounded by women who ‘ruled the roost.”

Young’s family were members of Spruce Pine Methodist Church; Bob taught a Sunday School class there.  He was also a long-time member of the Lions Club.

Educator Young passed away on 10/10/2011.  He and Betty are buried in the Green Young Cemetery, namesake of their ancestor Greenberry Young.

The Harris Middle School Auditorium was renovated in 2017 and named the Robert and Betty Young Memorial Auditorium.  According to Mary Beth Bartlett Bell, this was a fitting tribute to “a teacher of teachers, a leader of leaders, a role model for those educators who would some day become role models.”