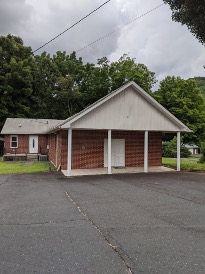 The Rock Creek Church of the Lord Jesus Christ has a history that expands for over eighty years in the Fork Mountain community. The birth of the church occurred on January 1, 1936. On that date, the first members of the pre-established church began taking turns having prayer meetings at their houses. Over the next several years, these prayer meetings occurred until the members decided to come together to build a small church building. The early days of the church saw many trials and tribulations regarding church doctrine. In fact, one individual was even murdered for his beliefs. 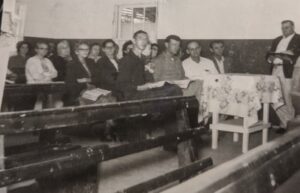 Rev. C.R. Cook and the congregation gather in the newly built church.

The Church was led by Rev. C.R. Cook. C.R. Cook was born in 1902. He was the son of Steven C. Cook and Margaret Melissa Gardner Cook. Steven and Margaret settled down and raised their family in Cooktown. Both C.R. and his wife, Carrie Gouge Cook were instrumental in the birth of the church.

Rev. C.R. Cook purchased land where the church still stands today. Rev. Cook donated the land, while other members donated logs and volunteered to deliver them to the sawmill. They managed to get the logs sawed for $6.00 a tree. By 1941 the church was officially finished.Founders of the church included: C.R. Cook, George Cook, Arthur Garland, Cart Garland, Howard Gouge, Clyde Yelton, and Joyce Yelton. Today, many churches throughout different parts of the country have grown out of the small mountain church. 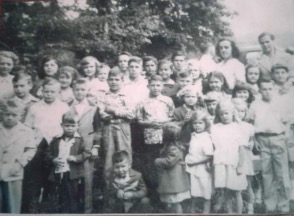