The Greenlee House Once Stood Proud on Grassy Creek 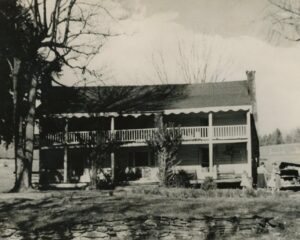 James Greenlee (1740-1813) of Morganton bought a 640-acre tract of land on Grassy Creek from John Carson, owner of large acreage in Burke County.  The tract of land in what is now Mitchell County passed from James Greenlee, who also owned land in Burke, McDowell, Yancey, and Buncombe Counties, as well as Tennessee, to his son Samuel Greenlee (1782-1848) and then to grandson George Elisha Greenlee (1837-1913).  Tradition says that the family used the land as summer pasturage for cattle and gave it the name “Grassy Creek.”

Construction of a dwelling on Grassy Creek may have begun as early as 1825, by Samuel Greenlee or others in the family.  The Greenlee House was built in the common style known as “dog trot,” because it was 2 large log structures connected by a common roof.  There were 2 stories in the dwelling, and the kitchen was a separate building due to the risk of fire.  Family stories indicate that the cabin was built in part by slaves who lived on the land and labored for the Greenlee family.  It is said that they made bricks and fired them in kilns located nearby to build the foundations and chimneys of the house.  “The water-powered gristmill, operated by George Greenlee and then his son Samuel, was torn down when the new highway <NC 226> was constructed,” although barns and other outbuildings were still standing.

The 5/20/1976 edition of the Tri-County News featured a 1966 photograph of the Greenlee House.  The article that accompanied the photo was written by Margaret Lawrence (1922-2009), a respected local historian whose research project for the nation’s Bicentennial was about early Mitchell County structures.  She interviewed many descendants of George Greenlee, as well as old-time Grassy Creek residents.  She corresponded with Greenlee family historian Ruth Greenlee of McDowell County and the NC Department of Cultural Resources, division of Historic Sites and Museums.

George E. Greenlee was the youngest son of Samuel Greenlee and Minerva Sackett (1804-1851).  He returned to Mitchell County following service in the Civil War; on 1/1/1872, he married Jane Elizabeth McKinney (1851-1890), daughter of Merritt McKinney (1824-1903) and Susannah Washburn (1830-1878).  George and Jane were the parents of 7 children; a Mitchell News-Journal Looking Back from July 2017 featured the family of their son Thomas Samuel Greenlee.

George E. Greenlee sawed lumber to “weather board” his home by covering the original logs of the structure.  He added a kitchen and dining room to the main house, wallpapered the interior walls, and handmade much of the furniture.  According to niece Maggie McKinney Davenport, Greenlee also sawed logs at his sawmill across Grassy Creek to build a Methodist Church next to the site of the Greenlee Cemetery.

Mrs. Lawrence learned from Elvira Greenlee Bryant that the house was “taken down” in 1987 and moved to Sam Byrd Road in Yancey County by Hap and Elizabeth Turner.  The logs were numbered as they were removed so the structure could be restored with the logs in proper order.  The weatherboarding was not replaced.  “The bricks in the original foundation had deteriorated beyond use, so Mr. Turner built another foundation.”  The old spring house was the only remnant on the homeplace.