The Bakersville Riot: The Greatest Battle In America since the Massacre of Little Big Horn

In 1893, an event known as the Bakersville Riot launched Bakersville across the front pages of newspapers worldwide.The events leading up to the riot occurred eleven years earlier. In 1882 Will, Dick, and Tom Whitson, three brothers of the Red Hill Community, murdered their distillery partner, Kit Byrd. The Whitson brothers, along with, Byrd operated many grocery stores that served as the front for the illegal sale of moonshine. The relationship between Byrd and the Whitsons had grown bitter as a result of financial disagreements and rumors swirling in the community of a possible affair between Byrd and Tom’s wife. 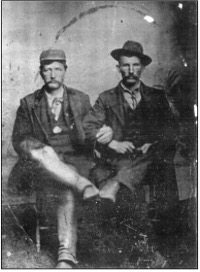 Tom and Will Whitson

On November 5, 1882 Kit Byrd arrived at the store armed and most likely expecting trouble. The Whitson brothers, also armed met him at the store upon his arrival. A scuffle between Tom and Kit erupted with the other brothers quickly joining in. In the midst of the scuffle a shot went off. It remained unknown who actually fired the shot as all four men were armed, however the Whitsons insisted that Kit fired the first shot. Kit made it about fifteen steps down the road before Tom fired in Kit’s direction. Simultaneously, shots rang out from the pistols of both Dick and Will as well. Kit collapsed on the road and died the next night. W.K. Byrd never got over the death of his son, and the words “Cruelly murdered” were written in the Byrd family Bible next to Kit’s name. An official proclamation was signed by Governor Thomas J. Jarvis increasing the reward to two hundred dollars for each brother’s capture and delivery back to Bakersville.

The Whitsons took on new identities as the Jones brothers, while investing in the coal industries throughout Virginia and Kentucky. In 1890 Dick Whitson, then known as Harrison Jones was killed over a land dispute in Wise County, Virginia. Almost one year after Dick Whitson’s death, a traveling salesman and law officer by the name of Jeff Hyams recognized Will Whitson, while traveling through Wise County. Hyams grew up in Bakersville and was a native of the Red Hill area. Hyams, along with the help of his brother-in-law, and Big Stone Gap Officer W.W. Adams, captured Will Whitson. Adams had known the brothers as the Joneses, and led Hyams right to him. Will had no time to warn his brother, as the three men crossed the state line in Kentucky to capture Tom Whitson in Bad Branch, located in Letcher County. After nine years on the run, the Whitson brothers had finally been captured. 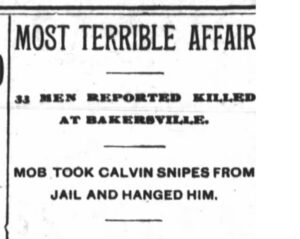 Not long after the capture of the Whitson brothers, Mitchell County became the site of another moonshine related murder. In the summer of 1892, while out searching for their runaway hound dog, two brothers named Isaac and William Osborne stumbled upon an illegal distillery operated by Aaron Wiseman, William Sneed, and Calvin Snipes. Later that evening, the Osborne brothers led Sheriff George Pritchard to the distillery location. Sneed took full responsibility and was arrested. Wiseman and Snipes were now determined to seek revenge.

One month later on August 28, 1892, an unknown individual patiently waited outside the residence of Isaac Osborne. As Osborne’s dog began to bark at the stranger, Osborne opened his front door and was met with gunfire, killing Osborne. Wiseman and Snipes were arrested based on strong motive and circumstantial evidence. Wiseman stood on trial and was acquitted for lack of evidence. William Osborne feared the same outcome for Snipes and that he and his family would be denied justice. Snipes waited trial in the Bakersville jail. The Comet, a newspaper out of Johnson City, reported that the Whitson brothers were sentenced to hang and were now waiting on their execution, while bunking with Snipes in Bakersville.

As reported by The Comet, by New Year’s Eve 1892, William Osborne organized petitions to form a mob to remove Snipes from the jail in Bakersville and lynch him. Osborne collected over five hundred signatures to lynch Snipes and also attempt to lynch the Whitson brothers as well as residents were still angry over the murder of Kit Byrd. Sheriff Moomaw began taking precautionary measurements to prevent the lynching by deputizing twenty five extra citizens. 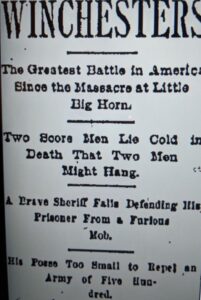 The Morning World Herald of Omaha, Nebraska declared the riot as “The Greatest Battle in America since the Massacre at Little Big Horn.”

As it began getting closer to sundown, the mob started marching toward the jail. Sheriff Moomaw shouted, “Halt, or I’ll give the order to fire.” The mob ignored Moomaw’s warning and in response he gave out the order, “Fire!” At the Sheriff’s order, seventy five rifles proceeded to shooting into the mob, they were met with fire from the mob. The deadly and accurate aim of the mob destroyed all of the windows in the jail. Over a dozen men fell either wounded or killed. The mob took control and overpowered Sheriff Moomaw and his posse.

The mob easily tore down the jail door and wasted no time reaching the three prisoners. The prisoners were dragged out into the open air with ropes around their necks. They were dragged by the mob over ice-covered rocks to a piece of land half a mile away. The Whitson brothers and Snipes were already dead by the time they reached the woods, but that did not stop the mob from hanging their lifeless bodies anyway. Twenty five bodies were found in front of the jail, while thirty others were wounded. The fatally among the wounded included Sheriff Moomaw, as the mob shot him twice in the chest and three times in the abdomen.

Newspapers from across the nation wired telegrams to Johnson City requesting more details. The Bakersville Riot graced the front pages of newspapers nationwide including The New York Times.The Morning World-Herald of Omaha, Nebraska declared the riot as “The Greatest Battle in America since the Massacre at Little Big Horn.” The Bakersville Riot even created headlines overseas in London, Wales, and Scotland as well. 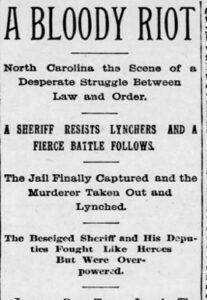 A heavy snow began falling throughout Western North Carolina. It quickly accumulated to the worst snow the area had witnessed since 1886. In Waynesville, snowfall resulted in between fourteen inches and two feet, and in some areas snow had been falling for several days and accumulations resulted in almost three feet of snow. The snowstorm halted the possibility of any follow up reports from Bakersville. The entire nation remained in a great state of suspense. 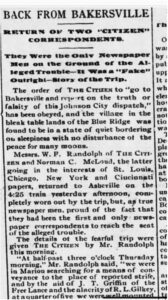 Randolph and McCloud’s journey was published in the Asheville Daily Citizen.

As the snow continued to fall, doubts concerning the legitimacy of the riot began to surface. Locals began chiming in including, Jeter C. Pritchard, a lawyer who practiced law in Marshall and the last man hired to defend the Whitson brothers. He had a reputation as a man personally familiar with nearly every citizen of Mitchell County and proclaimed to have only recognized one name on the list of victims killed.

Despite the blizzard conditions, two journalists, W. F. Randolph and Norman C. McLoud, traveled on horseback seventy miles into Bakersville from Asheville to verify the accuracy of this tale. Upon arriving in Bakersville they met former Sheriff George Pritchard. According to the journalists “his eyes bulged when we broke to him the ‘news’ in the outside world.” Pritchard stated that “Bakersville for a long time had been enjoying a season of freedom from lawlessness of every sort; that the holidays had been passed in unusual quiet. He claimed the story was “a miserable lie from beginning to end.” Pritchard also disputed the claim about rumors of an organized petition, to lynch the prisoners.The journalists also uncovered that the Whitson brothers occupied a jail in Asheville rather than the one in Bakersville. Pritchard’s account held up as all of the names listed as victim causalities were fake, including Sheriff Moomaw. The actual Mitchell County sheriff went by the name of Reuben Mckinney.

Randolph summarized their experience, “never did two newspapermen appreciate more fully than we did the ending of a long, tiresome journey- some might say a wild goose chase, but we got the truth and that’s what we went after.” 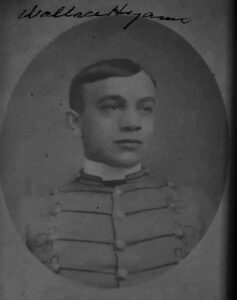 The man responsible for the great hoax, was nineteen year old, J. Wallace Hyams. Hyams was a native of Bakersville and was the son of Superior Court Clerk, Washington S. Hyams. J. Wallace Hyams had been well educated and received his schooling at the Statesville Male Academy. He obtained a position working as an assistant city editor at The Comet in Johnson City. In preparation for publishing his fabrication, Hyams had been the instigator in the numerous stories about the Whitson brothers since Christmas.

After the release of the hoax, Hyams responded to requests for more information about the Bakersville Riot by demanding payments, and claiming that he worked for the Southern Associated Press. The editor of The Comet claimed that he had no idea where Hyams had “obtained his bloody story.” The Argus-Leader reported that Calvin Snipes smiled when he first learned “how much excitement his alleged lynching had created all over the country and Europe.”

It is unknown why Hyams invented the story of the Bakersville Riot or just how he planned to get away with it. Hyams had been working for The Comet for only a little over a week.The Atlanta Constitution referred to him as the “Bakersville Liar,” and declared the hoax as “the story of the greatest fake that was ever perpetrated of the American newspaper.

In the aftermath, The Comet fired Hyams. Hyams moved back to Bakersville and worked as an editor for The Bakersville Enterprise. Two years later, Hyams contracted typhoid fever and died at the age of twenty one. Coincidentally, he was buried on January 3, 1895, two years to the date that his alleged riot had taken place. Some have described the timing of his burial as too coincidental, and have speculated that he faked his death and moved his family to Chicago, as a result of his now tarnished reputation.