In 1870, the Mitchell County census listed three people as miners by profession or occupation. The 1880 census lists 81 people as being associated with mines and mining. At the center of this dramatic economic development, the heart of which was to become the well-known mica boom, was Thomas Carlton Greene. 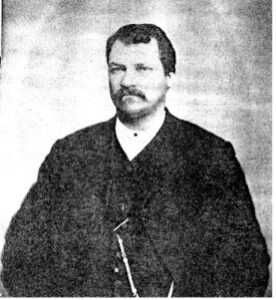 Thomas was born 13 March 1845, the first child of John and Nancy Ann Davis Greene in the Greene Cove section of Yancey County (now Mitchell). He had four sisters: Sarah Martha, Polly, Margaret, Francesca and two brothers: William E. and John M. He became a farmer and purchased 12 acres of land from Thomas Burleson on Cane Creek in 1861.

Thomas’ Great Grandfather John Greene served during the Revolutionary War, which may have been one of the reasons that on 24 September 1863, along with his uncles Joseph Jr., William, Athen, Thomas Starling, and others from the Cane Creek area, 19-year-old Thomas joined Company C of the 13th Tennessee Volunteer Calvary in Carter County, Tennessee. Uncle William 32, husband and father of three children was killed in the battle of Morristown. His other uncle, Stephen Morgan Greene, with whom William lived while Stephen taught school, chose to serve in John Blalock’s 29th Regiment, North Carolina Infantry.

Thomas contracted measles in February 1864 which gave him chronic diarrhea and affected his eyes, conditions that plagued him the reminder of his life. He recuperated and continued, but his illness returned on 26 August 1865. He was ordered to the hospital, but instead, with the help of family and friends, he went back home and was charged with desertion on 28 August 1864. It took him 2 months to cross over the mountains. He was able to accept some duty in December, but was fully restored to duty 9 March 1865. Thomas mustered out 5 September 1865 and in April 1869, Congress removed all absences without leave and/or desertion.

In Company C, Thomas served with Cane Creek neighbor, John Reuben McKinney. John was married to Nancy Greene with 6 children when he joined 24 August 1863. He mustered in 2 November 1863 as a private in Carter County Tennessee, contracted measles, and died 25 February 1864 in Nashville where he rests in the Nashville National Cemetery. 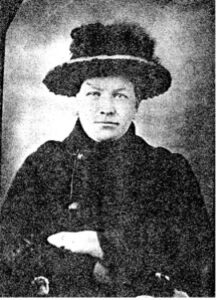 Thomas returned to farming and he and Polly were hunting ginseng or “looking for a turkey nest” when Polly picked up a large hunk of isinglass/mica on the side of Cane Creek Mountain. There is another story related to what he and Polly were actually doing on the mountain; however, that is a much more “mature adults only” account reserved for another time. However, this Sunday afternoon was the first step on the couple’s road to riches.

It probably was known first as Tom Greene’s Mine; however, later it is likely that the name Cloudland was given to the site because people at the famous Cloudland Hotel on the Roan Mountain could see the large white dump from feldspar waste taken from the mine. By 1896 the site produced over $100,000 worth of mica, about $2,450,000 today, and continued to a lesser extent until the late 1950’s and the great Mica Boom had begun.

The story of Heap and Clapp coming to Mitchell County and establishing the first large scale mica mining operation has been told numerous times. However, it is apparent that Thomas Greene was an important business partner with them in this effort as well as becoming a good friend, which led to naming his children: Irby Heap Greene and James Clapp Greene.

Thomas, on 9 March 1878, purchased 1/3rd acre from Robert N. Penland on which he built his new brick home, known today as the Greene House, which stands firmly on a hill overlooking Bakersville. The only home older is the Gudger House located behind the Mitchell County Historic Courthouse. In 1881, he purchased the 125 acres surrounding the house from Robert.

Joseph Kendrick Irby from Lincoln County, North Carolina had been working with Thomas in his mines. Joseph Sr. was listed in the 1880 census as living with his son in the Bakersville Township with the occupation of bricklayer. Apparently, the Irby’s played a significant role in constructing the house using bricks that were hand cast in the “bottom” below the house near Cane Creek.

In 1878, Stephen Morgan Collis, at the Roan Mountain Baptist Association meeting, made the motion to take up a subscription to build a Baptist church in Bakersville. Thomas’ success allowed him to donate the land for the first church which was built on or near the property where Henline-Hughes Funeral Home sits today. In addition to the land and his significant contributions to build the church, he also provided funding for a bell, which was washed away during the 1901 flood with the church. However, Thomas recovered it and it continues to ring in the Bakersville Baptist Church.

Thomas was elected in 1885 to serve one term in the North Carolina Assembly. Health issues were a concern that year and no notable contributions were reported during his tenure.

The family moved to Old Fort for a time where Polly died in 1916. She was returned to the family cemetery where “Little Willie” had been buried in 1881. Thomas came home four years later with his granddaughter Polly and died at 79 in his bedroom on 25 September 1924.

Up the ridge from the house is the family cemetery where Thomas rests with Polly, sons Willie and Dock Snipes Greene, daughter Lucy Belle Green, and daughter-in-law, Nora Pannell Greene, wife of Dock Snipes.

The writer is grateful for personal documents from Joseph L. Erwin, the Great Grandson of Thomas who died at 43 and rests in the Columbia Gardens Cemetery, Arlington, Virginia; the files of Mary Lee Barron; and Dr. Lloyd Bailey, whose Vol I of the Heritage of the Toe River Valley has been indispensable.