Our Earliest Highway: Bright’s Trace and the Yellow Mountain Road 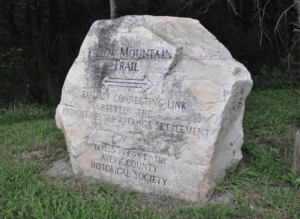 Most of us journey up US Highway 19E to Avery County not realizing we’re traveling over millions of hoofprints, footprints, wagon tracks, and finally automobile tracks that have preceded us by hundreds if not thousands of years. An ancient path across the mountains was created by migrating deer, elk, and buffalo years before the first European settlers would make their way into the region. The area where we live was not permanently inhabited by Native Americans, but used by the Cherokee and Catawba as a hunting ground. The animals and the natives alike knew the easiest paths from the rolling piedmont lands across the high mountains. The first Europeans to follow this trail were Hernando deSoto as well as Juan Pardo and the Spanish in the 1540’s and 1560’s on their journey of the southeastern lands looking for treasure. By the 1600’s-1700’s the Europeans had established permanent colonies, taking mainly coastal lands, but as more immigrants came to the New World, most wanted “elbow room” and westward expansion began. The colony of North Carolina was controlled by Great Britain who had “proclaimed” in 1763 that land west beyond the crest of the Blue Ridge Mountains – what we called the Eastern Continental Divide – would be set aside as land for the Native Americans. This would have made the area where we presently live in Native American territory and was considered Burke County. However, those who were brave enough to defy the King moved past the “line” with little notice from the British.The road or trail that was used ran from Morganton tothe Watauga Settlement (the Elizabethton area) in what is now northeast Tennessee. This thoroughfare was called The Yellow Mountain Road. At 5,540 feet, Big Yellow Mountain could be seen for miles and miles from either side of the “watershed line”. 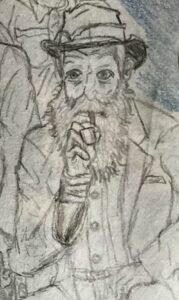 One of the first of those fearless settlers was Samuel Bright and his family. Bright settled along the North Toe River near the present day Sibelco – School House plant at Ingalls. First and foremost he quickly became “In league” or friends with the Natives that frequented the area. No one knows for sure when Bright and his family moved here, but we do know what he did for a living. Samuel Bright saw an opportunity along the “road”. The path itself ran from Morganton to Marion and then up the North Cove communities of Pepper’s and Honeycutt Creek to McKinney Gap and Gillespie Gap. From “the top of the mountain” through Grassy Creek to it’s juncture with the North Toe River. Heading North along the river the route proceeded along the foot of Humpback Mountain, along the “Bent” in Ingalls up to the mouth of Roaring Creek to the Yellow Mountain Gap then along the Doe River to the Sycamore Shoals of the Watauga Settlement. Bright became a guide for those moving along this ancient “highway”.He, with the help of his family, built “way stations” along the route that would give some shelter to those progressing west. Hundreds of families made their way across the mountains with Bright’s help. In 1777 after the American Colonies had declared their independence, the General Assembly of NC ratified legislation which created a commission. It was composed of several men including Samuel Bright “to lay off and mark a road by the nearest and best way from the house of Charles Robinson where the Court hath been held in the County of Washington (Tennessee) to the House of Edward Smith where the Court had been held in the County of Burke.” By this time, the roots of the “State of Franklin” were being established and that area west of the Proclamation Line would eventually become Tennessee. In 1780, the “road” would witness an event of historic proportions. In 1780, a call was answered by the men and women from “over the mountains” that would bring hundreds of men east back across that trail and ended at a place and a battle called Kings Mountain. 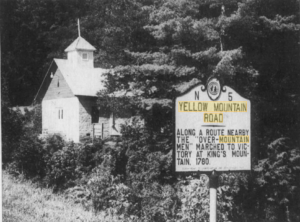 The “Overmountain Men” defeated the British in a decisive battle that Thomas Jefferson called the “turning point of the American Revolution.” As for Samuel Bright, his household shows up in the 1790 Census as having 5 persons, but court records also show that he was also in deep debt. According to legend, a family with the surname of Grant came through the area. Several of the Bright children ended up marrying several of the Grant children. Samuel Bright would end up selling his property along the Toe River Valley and moving west. Information about them after this seems to be non-existent other than the twist that one of those Grant’s ends up becoming a US President. Bright’s Trace and the Yellow Mountain Road have become one in the same and critically important to the history and settlement of the Toe River Valley. 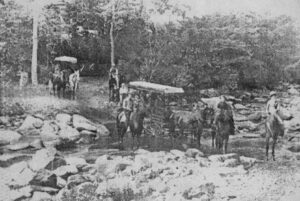