In Appalachia, a Herb Doctor is a therapist who heals with herbs.  Other labels for such practitioners, often but not always female, are “granny women,” “wise women,” or “conjurers.” 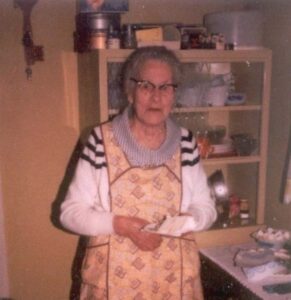 One of these herb doctors from Buladean was Roxanna “Roxaner” Bowman Putman. Roxanne Bowman was born 12/8/1883 in the Buladean community of Mitchell County.  She was the daughter of George W. “Wash” Bowman (1854-1933) and Margaret Francis Bowman (1853-1946).  Roxanne and her mother and sisters worked hard to “keep the family fed, clothed, and healthy” during a difficult mountain existence.  They farmed and preserved food, spun thread and wove cloth, and knitted for their own family and for sale to earn cash for the necessities they couldn’t grow or make for themselves.  In her older years, Roxanne reminisced about the hard work, which she stoutly maintained, “won’t kill anybody.” On 11/16/1902 Roxanna married Charles Sidney Putman (8/12/1875 – 8/29/1952); he was the son of James Webster and Martha Reid Putman.  Roxanna and Sid lived with her parents for a time, then built a little home on a dirt road off Hughes Gap Road, “within sight of the Tennessee line.”  In 1916, they built a larger home, and she lived in it the rest of her life, cared for in her final years by her son Jim and his wife Vertie. 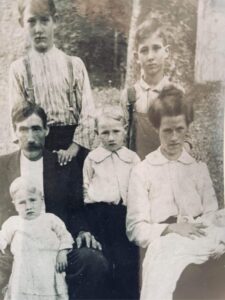 Roxanne and Sid Putman with 5 of their 7 children

Sid and Roxanna had 7 children:  Willard Putman (born 1903), Elmer Putman (1905-1980), Elsie Putman (1907-1909), Jason Putman (born 1910), James Delbert Putman (1913-1988), Viola Putman Hughes (born 1916), and G.W. “Wash” Putman (1920-2013).  When she was 93 years old, she boasted of having 36 grandchildren, 42 great-grandchildren, and 7 g-g-grandchildren – “a pretty good drove!” Author Elizabeth Hunter wrote a feature article about Roxanna in the Mitchell Journal of 10/5/1978 entitled “Buladean Herb Doctor.”  Of her doctoring visits Roxanne told Hunter that “Sometimes I stayed gone two or three days – till they were better – but I never took any money for what I did.” Her neighbors and those more distant sought after her herbal teas and “other remedies she learned from her half-Indian mother-in-law and from her own mother.”  Roxanne attributed her own longevity partly to that herb doctoring; “hard work, doctoring herself, and putting her faith in the Lord,” she claimed had kept her healthy.  She cautioned against relying on doctors “unless you want to die out soon.” Midwifery was not her preferred practice, but she did “catch” 28 babies during her time doctoring.  She most enjoyed healing those with ailments, and she “traveled from Johnson City to Elizabethton, Bakersville to Spruce Pine doctoring the sick.”

A section of Hunter’s article was devoted to some of Roxanne’s remedies:

Roxanna was a member of Odom’s Chapel Free Will Baptist Church.  She died 5/22/1982, and she and Sid are buried in Hughes Cemetery.