On 19 October 1899, J.J. Britt, presiding over the North Carolina Republican Party meeting in Statesville opposing the suffrage amendment, the Campaign for Freedom In North Carolina, said: “We have entered upon a period of unparalleled prosperity in every line of human endeavor… But just as this tide is at its flow, the dominant political party under the specious but false cry of danger to “white supremacy” rises to strike down the political rights of a hundred thousand upright and patriotic citizens, because, forsooth some have sable skins and other the muses never smiled and to books they are strangers.” 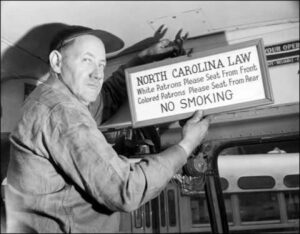 The amendment marked the beginning of North Carolina’s efforts to disenfranchise people of African and Native American descent. The laws created apartheid, including separations of white, African American, and Native American people. Specifically, it created a requirement and the enforcement for separate personal facilities for schools, water fountains, hotels, railroad waiting rooms, restaurants, militia, and marriage between races among others. In addition, it perpetuated the cultural rift among people of different colors. It has been suggested that enforcing these laws for over 60 years is a significant factor in today’s negative race relationships.

Two locally known and respected individuals who were good friends worked diligently to prevent these laws from being passed. J.J Britt and Judge Jeter Connelly Pritchard, brother of Sheriff George Pritchard of Bakersville (more to come about him in a separate article) were thorns in the flesh of the North Carolina Democratic Party. While their efforts were not successful, both will be remembered with high regard for their commitment and many other accomplishments.

James Jefferson Britt was born 4 March 1861 to James Jefferson Britt Sr. and Nancy Underwood near Johnson City, Carter County, Tennessee. J.J. Britt Sr. was a farmer and mechanic, who had served in the Union army during the Civil War. The family farm was raided by both armies during the war with devastating results and young Britt had much to overcome for success. He attended formal school for only ten months; however, he was personally driven to learn on his own. At eleven he was working in a shoe shop and learning the trade.

Continuing to self-educate, he qualified as a teacher in 1877, at the age of sixteen. He married Mary Mosely in 1880 and moved to North Carolina where he was principal of Burnsville Academy, (1886-93), superintendent of the public schools of Mitchell County, (1894-96) and headmaster of Bowman Academy, (1895-96). In 1896 he was the editor of the Bakersville Enterprise newspaper.

Britt was a strong supporter of probation politically and a special revenue deputy in Statesville where he distinguished himself by locating and prosecuting illegal alcohol production. He served as adjunct professor of mathematics at the North Carolina College of Agriculture and Mechanic Arts as well as representing the ninth district on the Board of Trustees. After his house in Bakersville with its extensive library was washed away in the May 1901 flood, the family moved to Asheville. He went on to earn a law degree from the University of North Carolina Chapel Hill and was admitted to the bar in 1900.

He was a special assistant United States Attorney, a member of the North Carolina State Senate, special counsel to the Post Office Department, special assistant to the Attorney General, appointed by President Taft as the Third Assistant Postmaster General, elected as a Republican to the Sixty-fourth Congress, and served as chief counsel for the Treasury Department’s Bureau of Prohibition.

He returned as a full-time resident to Asheville and was active in numerous community organizations including being a “Bible Teacher” in the First Baptist Church. He practiced law until his death at 78 on 26 December 1939, and now rests beside his wife and among several of his children in the Riverside Cemetery in Asheville.