Waightstill Avery Anderson was a Mitchell County revenue officer. Anderson married Nora Bowman, the daughter of J.W. Bowman and Mary Garland. Anderson had the reputation as a man who “possessed many enemies because he was active in running down the moonshiners who infested the mountains as thick as grasshoppers in Kansas.” One instance recorded Anderson assaulting “Mr. T. C. Greene, one of the best citizens and most wealthy gentleman of Mitchell County”, over a political article published in the Mountain Voice.

In February 1884 Waightstill and his brother-in-law, Ed Ray were involved in a dispute at the Flat Rock  Mine, that later became known as the Mica Mine Massacre. The land to the mine was first claimed by Capt. John C. Blalock. Blalock had yet to complete his entry or have it surveyed, and after it lapsed for two years, the Penlands received possession and sold it to Colonel Isaac Bailey. Bailey was leasing an option to Cebe Miller and Milton Buchanan.

On February 17, 1884 Ray offered Anderson an interest in the mine in exchange for assistance in securing it. Ray and Anderson arrived at the mine and were met with several men who had gone to work the mine on that particular Sunday. These men included: Ed Horton, Arthur Buchanan, William Burleson, Stephen Burleson, Cebe Miller, and Bob Penland Jr. A scuffle shortly broke out among the men. Ed Ray knocked Cebe Miller down the shaft face first. William Burleson then knocked Ray into the shaft and fell in after him. William Burleson pointed his pistol at Ray and yelled, “Disarm him!” Arthur Buchanan took Ray’s pistol and Penland threw it back into the tunnel that intersected the bottom of the shaft. Meanwhile, ten feet above them, Anderson and Horton had gotten into a scuffle of their own. Horton bit Anderson’s finger and picked up a rock. Anderson cocked his pistol and called out “You leave here Ed Horton or I’ll kill you! Horton replied, “I will. I will. I will.” Horton turned to head off, when Anderson began firing until Horton was struck down dead. Ray began shouting, “Let me up! Waits has killed someone!” The men let him thinking they had disarmed him. Ray suddenly pulled out a pistol and started shooting Miller and the two Burlesons. Miller and Stephen Burleson would later die from their wounds. Ray and Anderson remained on the run for three weeks until they decided they could prove they acted in self-defense and turned themselves in to their father-in-law, J.W.Bowman.

There was bitter feelings toward Ray, Anderson, and Bowman in the community, as most felt that Bowman was responsible for Ray’s and Anderson’s claims from the beginning. Ray and Anderson were moved to the jail in Asheville for safe keeping. With the help of outside friends they planned their escape. On July 3, 1885, four pistols and an axe were passed to Anderson and Ray. They slipped the lever that locked the cell doors and gagged the sheriff and jailer. Anderson then began going to work with his axe, creating a hole in the jail wall. Anderson and Ray stepped out of the jail and rode off on horses provided by their friends and began heading far west. 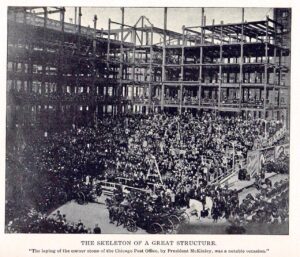 “If you observed the man in citizen’s clothes standing nearest President McKinley when he was in Chicago laying the cornerstone of the new Post Office Building, that was W.W. Anderson.”

Years passed on without the two fugitives, who remained on the run since that infamous July night. Ray was believed to have fled to Mexico, his wife Melissa would later remarry Senator Jeter Pritchard. It seemed that relatives of Anderson’s were aware that he had changed his identity and had been working in the Secret Service of the United States under President William McKinley. According to reports, “If you observed the man in citizen’s clothes standing nearest President McKinley when he was in Chicago laying the cornerstone of the new Post Office Building, that was Anderson. “On Inauguration Day, if you had been in the streets, and looked closely at the men on horseback who were nearest the carriage that bore the president, and you had distinguished the sandy-haired man, that man was Waightstill Avery Anderson.”

Furthermore, Anderson’s double life would not end in Washington D.C. Charles R. Hood, who had been born Waightstill Avery Anderson was sworn in as a U.S. Marshal for the Arizona Territory on April 18, 1898. In February 1900, Hood led a posse out from Tombstone in pursuit of a gang who had attempted to rob a Wells-Fargo shipment on a train headed for Fairbanks. Hood stayed on the trail of the gang until they were captured. According to newspaper reports, Hood had ridden three hundred miles, and “the credit of the capture and the breaking up of the gang belongs to Hood.” Hood continued

his career as a line rider and marshal, in charge of guarding silver and gold shipments for the Arizona Eastern and Southern Pacific Railroad Companies.

In May 1913 letters regarding Charles Hood arrived in Bakersville. These letters were inquired for Mrs. Nora Anderson, regarding the circumstances surrounding the death of her husband. Hood had entered the Empalme Club House in Mexico under the influence of liquor and threatening to shoot the night clerk. In response, the clerk grabbed a gun and killed Hood. His few personal effects would be shipped to Bakersville in September 1914. As fate would have it, Waightstill Avery Anderson would never see the Western North Carolina mountains again.