Mary Wright was born about 1836 according to her death certificate, but most census records show her as being a few years younger, born perhaps about 1839.  Her parents, Solomon and Hannah Hughes Wright, were living in the Red Hill community of what was then Yancey County.   Some accounts say that Solomon Wright and his wife’s Hughes ancestors “were among the first settlers in the Toe River Valley.”  Mary was usually called “Polly,” which was a Scots-Irish nickname for Mary.  Her siblings were Elmira Wright Mace, John E. Wright, Solomon Wright, Jane Wright, and Thomas Wilson Wright. 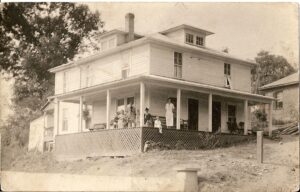 The Craigmiles House in Bakersville.

Near the end of the Civil War, Polly married Berry Stewart (1841-1907), the son of Blackston and Levina Hensley Stewart and therefore nephew of Francis Stewart, who was hanged in 1833 for the alleged murder of her husband Charles Silver.  Berry Stewart served in the Civil War as a Sergeant, Company B of the 58th Infantry, CSA.  He was reported absent on an expired furlough in the spring of 1864, which may have been when he and Polly married.  Berry Stewart was wounded twice during his service, at Chickamauga in September 1863 and at Kolb’s Farm, near Marietta, GA, in June 1864.

The oldest of Berry and Polly’s 4 children was Thomas Wilson Stewart (1865-1947), who moved to Wake County.  Next was Hannah Elizabeth Stewart (1868-1941), who married John Wesley Bryant and lived at Beans Creek.  Charles Stewart was born in 1873, and his death in 1923 was the result of his 8-year service as a Revenue officer and an attempt to stop an illegal cargo of whiskey.  The youngest child was Sarah Stewart (1877-1963); her first husband, William M. Greene, died in 1917, and she married J.B. Craigmiles, local newspaper editor. 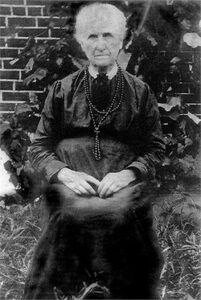 An article in The Asheville Citizen-Times on 1-13-1935, written by Monroe Thomas, labels Mrs. Stewart as Mitchell County’s oldest citizen at 97.  Polly was living with her daughter, Sally Craigmiles, and able to help with housework and meal preparation.  Her vision and hearing, Thomas said, were so good that “she can see to thread a needle and do needle work, and she can hear a clock tick in another room.”  She loved to listen to the radio, but deplored the news she heard, maintaining that people had declined spiritually and morally since her childhood.  “Wholesome community activities have all been done away with,” and churches, through their laxity in their discipline, have lost grip on the people.”

Thomas continued his account by telling how Mrs. Stewart “spends much of her time plaiting rag rugs of beautiful artistic designs” and gives them as tokens to friends and family, though she “expects to be hale and hearty for many years to come.”  Polly Wright Stewart passed away on 10/8/1936 from apoplexy, an old term for a stroke or cerebral hemorrhage, according to her Mitchell County death certificate.  Her son-in-law, Joseph Baird Craigmiles composed her obituary, extolling “the virtues, fine character, and patience of this saintly woman.”  She lived to see five generations, as she was survived by 3 children, 17 grandchildren, 33 great grandchildren, and 1 great-great grandchild.  Her funeral was preached in the Bakersville Methodist Episcopal Church, and she is buried beside her husband in the Old Bakersville Town Cemetery.