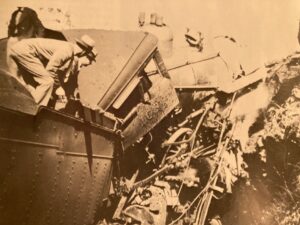 The first head-on collision ever to occur on the Clinchfield Railroad in its history took place on February 7, 1932, when the No.103 pusher locomotive and No. 38 Clinchfield passenger train collided at Berry Gap just above Spruce Pine.

The coming of the Clinchfield Railroad to the region in the early 1900s was a boon for the area and opened up the isolated mountain region to the outside world. The building of the railroad through the mountains was an arduous task and an engineering marvel that still garners attention today. The railroad reached Spruce Pine in 1903 and Altapass by 1905. Eventually the line was completed from Elkhorn City, Kentucky to Spartanburg, South Carolina, and brought coal from the mountains of Kentucky to the power plants of the booming industries of the south. However, progress unfortunately comes at a price. Countless men were maimed and killed in accidents and incidents during the building of the engineering masterpiece. However, accidents were a part of the everyday running of the railroad through the mountains. One of the greatest tragedies in the history of the Clinchfield line took place right above Spruce Pine on Sunday, February 7, 1932, at a place called Berry Gap at milepost 183.1 on the Clinchfield Line. Berry Gap is located near the present day Quartz Plant and Carpenter Island Road at Altapass where the North Toe River and the railroad make their way through the cut in the mountains. On this cold and gray February day, snow flurries filled the air as Clinchfield Steam Engine Number 38 left Elkhorn City, Kentucky, on its way to Spartanburg, South Carolina. The train arrived in Erwin with passengers disembarking and boarding as normal. Number 38, with its crew and passengers, made their way through the Nolichucky Gorge through Mitchell County “sounding the whistle at road crossings, waving to people along the track, who loved to see the passenger train go by. Everything was perfect until No. 38 reached that fatal cut two miles above Spruce Pine,” according to an article written by Clinchfield historian Clarence Greene. Clinchfield Engine No. 734 was returning north from helping to push a coal train, and headed back toward Erwin from Altapass. The pusher crew evidently either completely forgot that the passenger train was due, or thought they could get back to Spruce Pine from Altapass where they had turned their engine in the wye (a triangle of railroad track used for turning locomotives or trains) before No. 38 left the Spruce Pine Station. The Erwin Record states that when the station agent at Altapass saw the pusher engine take the mail line, he called the dispatcher in Erwin. The dispatcher then called the station agent at Spruce Pine and it was found that both No. 38 and the Clinchfield Pusher had departed at exactly the same time. Thus, the collision could not be prevented. No explanation is offered as to why the Altapass agent called Erwin instead of Spruce Pine, which would seem to have been a more logical step. Claude McClure, the longtime Spruce Pine agent, jumped in his car and began the futile chase after the passenger train immediately after realizing the disaster that was about to happen.

Hundreds of local residents made their way to the horrific scene the week following the wreck. The smaller engine was totally destroyed and the pusher locomotive’s front was badly damaged.

The two steam locomotives collided head on at Berry Gap at a speed thought to be between 75 and 80 miles per hour. The force of the crash was so great that some of the seats in the passenger coaches were pulled from their bolts in the floor. James Walter Sublett and Nelson P. “Piedmont” Palmer, both experienced engineers, were killed. Palmer died instantly as he was crushed between the boiler head and the tender of the 103, where he was deluged with scalding water and steam. Engineer Sublett died the next day. Due to the weight and size of the pusher locomotive, both Engineer I.C. Smith and Fireman A.R. Carpenter were not seriously injured. Passengers on the No. 38 miraculously walked away with only cuts and bruises. Although derailments and wrecks still occur today, technology has eliminated the nightmarish crashes of the early days of the Clinchfield. “Fiddling Clarence Greene” of Penland, a renowned musician, wrote a ballad about the disaster and titled it “The Wreck above Spruce Pine”. It was later recorded by The Toe River Valley Boys.

The Wreck Above Spruce Pine
Come all you railroad workers and listen to my song;

I’ll tell you of a tragedy, it sure won’t take too long.

It was on last Sunday Morning, in the little Erwin town.

Jerry Sublett got his orders, for he was Spartanburg Bound.

Piedmont Palmer was his fireman, he left a wife at home;

Little did she realize she’d be left all alone;

They made the stops and stations, all about on time,

Till they came within that cut, two miles above Spruce Pine.

Making forty miles an hour, when they came in that place;

A seven hundred Hallet stared them in the face;

For in that fatal moment, someone was doomed to die.

The banks were lined with people, and people were on the track,

When they pulled that fireman’s body from that awful wreck;

When that seven hundred Hallet and old 38 did crash.