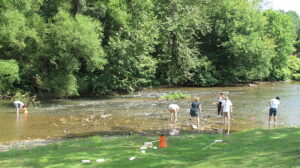 According to the Cherokee, a river is referred to as the Long Man with his head in the mountains and his feet in the sea. The North Toe River’s head is at Sugar Gap in the mountains of Avery County and the South Toe’s head is in the Black Mountains near the Blue Ridge Parkway. Hydrologically speaking there is no “Toe” River. Even after the South Toe and North Toe combine near Kona, it is still technically called the North Toe River. The river then meets with the Cane River and they become the Nolichucky flowing into the Tennessee on to the Mississippi and then the Gulf of Mexico.

When the Clean Air Act first became law in 1970, the Senate passed it without a single nay vote. Only one House representative had voted against the bill. During the signing ceremony, President Richard Nixon said, “As we sign this bill in this room, we can look back and say, in the Roosevelt Room on the last day of 1970, we signed a historic piece of legislation that put us far down the road toward a goal that Theodore Roosevelt, 70 years ago, spoke eloquently about: a goal of clean air, clean water, and open spaces for the future generations of America.”

The Federal Water Pollution Control Act of 1948 was the first major U.S. law to address water pollution. Growing public awareness and concern for controlling water pollution led to sweeping amendments in 1972 and the law became commonly known as the Clean Water Act (CWA). The CWA established a national framework for addressing water quality, including mandatory pollution control standards, to be implemented by the agency in partnership with the states. 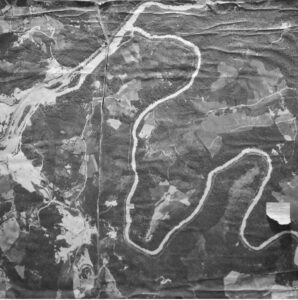 Aerial Photo of Toe River near Kona circa 1951.

A group of citizens from Avery, Mitchell, and Yancey Counties, began discussions in 1973 which led to the formation of the Toe River Valley Improvement Association with a major goal to clean up the North Toe River, especially those that were related to mining pollution.

The first public meeting of the group was held in March 12, 1974 was a bit contencious. In June, letters were sent to the Environmental Management Commission of North Carolina and the United States Environmental Protection Agency requesting that a change be made to reclassify the North Toe River to the designation of trout water. The letters were accompanied with documented support from the three county Boards of Commissioners; a petition with over 2000 names; statements of support from a number of service clubs and organizations, county health departments, NC Wildlife Resources Commission, county soil and water conservation service; and a number of letters from individual residents.

Officials from some of the mining companies responded negatively and some angerly; however, on August 21, 1974 the classification for the North Toe River was changed to become effective on September 1, 1974. Mining companies were directed by Federal and State agencies to maintain discharge permits and were provided 1 to 2 years to comply.

A goodly number of the Valley’s most respected residents were listed as members of the Toe River Valley Improvement Association. A major leadership role was taken by Mr. A.D. Harrell, President of the Mitchell County Farm Bureau. A.D. was a progressive and innovative farmer, avid outdoorsman, and obviously was a major factor in the Association’s formation and successful efforts.

The Association was tasked by the N.C. Office of Water and Air Resources to monitor the extent to which the mining companies complied with the standards established and were given 7 x 24 rights to test the water at any location. Again, some controversy surrounded this duty; however, both the Association and mining industry officials complied.

In 1976, as the mining industry was beginning to comply with the implementation of the regulations, one person remarked that, “God put the minerals where they are and intended man to take them.” The response from the Association can be a reminder to us today related to all of our natural blessings: “To these contentions we point out that God also made the Toe River to run clear and pure. And He gave man the ability to extract those minerals in a. fashion that would preserve the natural beauty He created. Further, He gave man the choice of whether to utilize that ability.”

Continuing the involvement of residents interested in protecting and preserving the river and its watershed, The Toe River Valley Watch was organized by Dr. Jim Carroll, Mignon Durham, and Starli McDowell in 2007. Today, under the leadership of Starli McDowell, the group continues to work in partnership with the mining companies as well as other industry, agriculture, and public health organizations to make sure that these waters run clean and provide for economic growth from mining, farming, and tourism as well as allowing all of the Valley’s residents to enjoy the natural beauty and benefits that nature originally provided.

Most of those walking along, driving along, or floating down the Toe River today appreciate and take for granted the clear water running beside clean banks and around exposed rocks. They may even cast a line in and likely get a fish they can eat or return for another day. At one time, they might have been able to walk across those same stretches of highly polluted and sediment filled river, some have said, “without getting their ankles wet.”

Today, the mining industry takes seriously their obligations to not just continue to add to the economy of the Toe River Valley but also to make sure that they maintain the river’s natural beauty and water quality. This was not the case 50 years ago and the change in attitude and commitment came about because a courageous group of people negotiated with that industry to do the right thing economically and ethically for all of the people in the Toe River Valley.

Feldspar, quartz, and mica are some of the most common and abundant minerals worldwide. However, these are of extremely high quality in Mitchell County for all applications and are found in unique abundance.

The first large scale sheet mica mining operations in the late 1870’s considered the feldspar found with mica to be a waste byproduct and dumped it in huge piles beside the mines. In fact, the famous Cloudland Mine on Cane Creek was named such because people could see the white dump from the Cloudland Hotel atop Roan Mountain.

Around 1911, it was discovered that feldspar could be a critical addition to add quality to glass production. This created a lucrative market for a second mineral from Mitchell County. Huge chunks of feldspar were fairly easy to separate from the mica and quartz and the first grinding mill for feldspar was constructed in Micaville in 1923. Evidence of quality is demonstrated by the fact that the glass in the Mount Palomar telescope lens was made with Mitchell County feldspar.

These deposits of high-grade, easily separable feldspar became depleted in the 1930’s. However, high-grade feldspar still existed, but it was in deposits with smaller chunks along with mica and quartz which could not be extracted by the methods available at the time.

The U. S. Bureau of Mines working with Consolidated Feldspar Corporation created a new method to extract feldspar based on the success of extracting copper in western mines. It was called flotation and the first local mill was created in Kona in 1944. It was an immediate success. Soon after, a similar method was used to extract the mica that could be used also in many different applications in cosmetics, paint, paper, tires, pottery, and many other everyday uses.

The quartz that was extracted continued to be considered an impurity; however, in 1959 another discovery of the commercial value of quartz along with an extraction process made it economically beneficial, especially for Mitchell County. Today, 100% of computer applications worldwide using silicon chips has a little piece of the County in them and has resulted in a billion-dollar industry.

During these early phases of mining development, the only alternative for dealing with the impurity wastes resulting from the processes was to dump them all in the Toe River. The 1957 State Stream Sanitation Committee of the North Carolina State Board of Health pollution survey report on the French Broad River Basin classified both the North Toe and South Toe as D, meaning Agricultural, which included irrigation and livestock watering and industrial cooling and process water supply. The study also noted that the water quality of both was poor because of the turbidity caused by mining waste.

As evidenced in the photo above, in the 1950’s one of the oldest rivers in the world was so filled with sediment and chemical pollution that aquatic life was practically nonexistent and a person could literally walk across it at many sections. Water recreation activities were nonexistent, livestock could not drink it, and it smelled bad for anyone living close to its banks.

Next week we will see how residents and mining company officials worked together to make the changes we expect and appreciate today. The successful outcomes of those negotiaions are a result of a jointly agreed upon belief that is best described in a press release statement in 1976: “We can have a clean pure wild and scenic river and at the same time have vigorous economic growth and full employment.”

Special thanks to Larry Harrell, Tom Freeman, and Felix Stith.