“Crest of the Blue Ridge Highway” ~ The Parkway before the Parkway 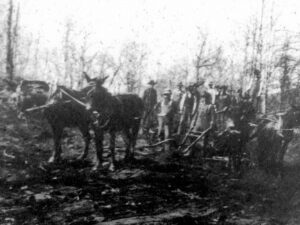 Work on the Crest of The Blue Ridge Parkway between Altapass and Pineola began in 1913-1914.

In the early 1900’s, Americans were gaining great mobility with the invention of the automobile. In 1906, North Carolina’s State Geological and Economic Director, Joseph Hyde Pratt, had a vision of bringing visitors to the North Carolina mountains to experience views “never to be forgotten”. Colonel Pratt was a leader in the Good Roads Movement in North Carolina and used his position to begin the political and engineering work for such an undertaking. He proposed a scenic toll road along the crest of the Blue Ridge Mountains from Whitetop Mountain near Marion, Virginia to Tallulah Falls, Georgia. The Yonahlossee Road around Grandfather Mountain was already included in the route and surveying of the remainder of the 350-mile route began in 1909-1910. It was estimated that the road would cost about $5,000 per mile. He intended the road to be 24 feet wide and a sand or clay surface, not to exceed a grade of 4.5 percent. 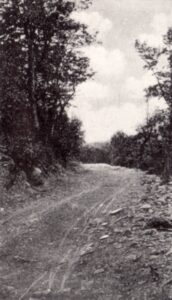 Pratt quickly realized that the road through the Black Mountains and the Craggies could cost up to $12,000 per mile. (In today’s money that would equate to millions of dollars per mile.) He proposed using convict labor to keep down the cost. Camps were set up along the survey route, including one near the Clinchfield Railroad between Altapass and Gillespie Gap. Most of the route lay in North Carolina. Work began on the road in July of 1912 by Pratt’s Appalachian Highway Company of Chapel Hill.  World War 1 brought a halt to the construction of this first mountain parkway. Fortunately, in the 1930’s, a movement to create the Great Smoky Mountains and Shenandoah National Parks in the eastern United States resurrected the idea of a mountain parkway that would connect the two parks – the future Blue Ridge Parkway. One section of the Blue Ridge Parkway closely follows the “Crest of the Blue Ridge Highway” near Altapass between mile markers 317.6 to 318.7. 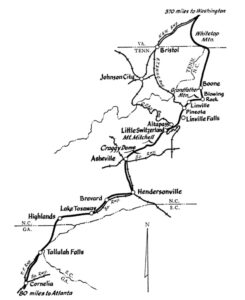 Map of the proposed Crest of the Blue Ridge Highway.