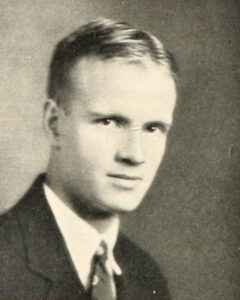 Over 40 physicians, 25 of whom served Bakersville and the northern end of the county, have been identified as having practiced in Mitchell County from 1867 to the beginning of three major health related institutions: the Bakersville Community Medical Clinic, the Spruce Pine Community Hospital, and the Toe River Health Department. Each of these deserves a separate story including the physicians who have served in them, which will be presented at a later date. For now, we will take a look at standalone offices and clinics in Bakersville.

Dr. Robert Presswood returned to Bakersville after earning his professional degree from the Nashville Medical College, later Vanderbilt School of Medicine, in 1888. He established a practice and built the first freestanding medical office and pharmacy in the county. Today that building houses the Mitchell County Historical Society Museum. His was an untimely death in 1899 at 37 resulting primarily from alcohol abuse.

Until 1933 most physicians rode horses and later drove the mountain roads to tend to their patients. Some kept office hours in a room in their home.

Paul Thomas McBee was the oldest child of John Calhoun and Margaret Chambers Thomas McBee. He was born on Manilla in the Philippine Islands 9 July 1905 while his father was serving in the United State Army during the Philippines-American War. The family returned to Bakersville after his father completed law school at Wake Forest University in 1910. Paul completed school in Bakersville then finished Wake Forest University with two years of medical education and earned the MD degree from the Medical College of Virginia in 1930.

He returned to North Carolina and began practice in Winston Salem; however, he decided that life in the mountains suited him better and he returned to Bakersville. There he borrowed the money to purchase a small frame house from the local bank and secured credit from Powers and Anderson to buy instruments. The McBee Clinic was born.

He and a nurse at the Clinic, Ivy Sandy, fell in love and were married in the building in November 1933. She later became an anesthesiologist and the couple worked together for many years. In 1939, they moved to Marion where he established a practice and became a widely known and respected surgeon preforming over 10,000 operations in his career. Not only was he successful as a surgeon, he also participated in research and presented papers, especially related to abdominal surgery, nationally. In his 60’s he became ill with Parkinson’s disease and died in October 1970 from a self-inflicted wound to the head.

Dr. A.E. Gouge built the second standalone office beside his home in 1934 where he maintained his practice until retirement in 1964.

The McBee Clinic became a domestic residence; however, it was reopened in 1949 by Dr. Gouge and Dr. James W. Berry along with Dr. McBee as the Dorothy Carolyn Hospital. Later with an annex, it served Bakersville and the surrounding area until the late 1950’s when it became a residence again.

Dr. James William Berry was the son of Walter Charles and Daisy Estelle Rosser Berry born 7 June 1919. He graduated from Bowman High School and Wake Forest College where he served as assistant professor of biology. He earned the MD degree from Bowman Gray Medical School in 1944 and served in the Navy until 1946. Returning to Bakersville to open his practice, he married Anne Woods and had two sons. Unfortunately, he died from a heart attack at age 36.

Dr. George Kimberly, came to Bakersville in 1960 and began his practice in a office above what is now Bowditch Antiques and Collectables. Later he had an office built beside Graham’s hardware store, now the Bakersville Community Health Center, which he shared with Dr. J. T. McRae. Both left Bakersville in the 1960’s. Dr. Kimberly to Mocksville where he lives today and Dr. McRae to Winston Salem. Dr. McRae returned to Bakersville after retiring in 1985 where he lived until his death in 2003.

Until a dedicated group of community residents began their efforts to establish a clinic in 1971, Bakersville and the north end of Mitchell County had no convenient access to medical services.