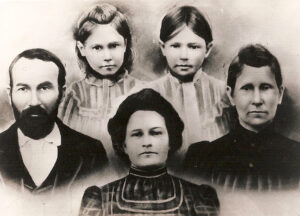 A teenaged Mary Elizabeth Whitson with 2 younger siblings and their parents D.C. and Vicie Tipton Whitson.

Mary Byrd was interviewed by writer Joyce Boone for an article in The Tri-County News entitled “A Mountain Gal for 98 Years;” the clipping found in the Historical Society’s archives was undated but likely published in 1980.  Mary shared with Boone many recollections of her long life, including how hard it was growing up in a large family when money was scarce.  Her parents “put the children to work early, teaching them to manage and care for themselves.”  To make extra money, Mary would collect “bambuds,” which sold for $1 per pound.  She and her siblings walked three miles to Brummitt’s Creek School.

Despite the hard work, Mary and her elder brother Nelson “had lots of fun.”  They rode an ox, which took quite the effort to “stay on its back, as its skin slid back and forth.”  She laughed over the times they were thrown in the mud and got up and started again.  They made their own sleds in the winter and rode down the hills, and they climbed trees and fished in the summer. 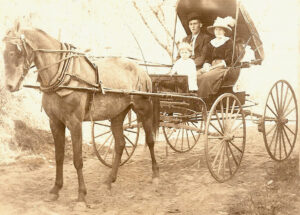 On 9-27-1904 Mary wed Arthur William Byrd, son of James Manuel and Nancy Garland Byrd.  Arthur and Mary shared the 11/27 birthday, although he was born in 1886.  Mary told about difficulties in the early years of their marriage when Arthur worked away from home, on the railroad, and she stayed home and helped work the farm.  Things got better, she said, as he became a “real good carpenter, building homes in Erwin and all around.”  Mary helped her husband build their own house.

Mary described Arthur as a “good husband and so good to me.”  He died 10-20-1967, and Mary said, “My heart was broken and I grieved for about 5 years.  But then the Lord told me none of that would help, so I tried to look to the future.”  She said it did get lonesome living alone, but she stayed very active, taking care of her house and garden; she was an energetic member at Tipton Hill Methodist Church.  “It don’t hurt nobody to work,” Mary claimed, “just so they don’t lift things that are too heavy.”

Mary’s other words of advice to young people for keeping vigor and enthusiasm into their old age included, “Stay out of bad company” and go to church regularly.  She also recommended, “Don’t talk about your troubles all the time, and keep from talking about other people.”

In May 1980, Aunt Mary was honored as the oldest person at the Mitchell County Senior Citizens Center at 97 ½ years old.  She passed away almost 10 years later, on 2-16-1990, still amazingly independent.  Her nephew, Frank Griffith, once told his wife Faye that he’d been by Mary’s house and “seen something he never in his life thought he’d see – a 103-year old woman cutting weeds in her yard with a mowing scythe!”  Mary Whitson Byrd is buried beside her husband in the Tipton Hill Community Cemetery.