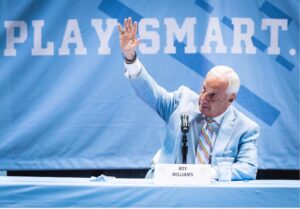 The legendary basketball coach announced his retirement on April 1, after 48 years of coaching. Roy Williams was born on August 1, 1950. His family lived in Spruce Pine at the time of his birth, however he was born in Marion Hospital as Spruce Pine would not establish a hospital until 1955. When Roy was around the age of 3 or 4, he and his family moved from Spruce Pine to Asheville. All three Western North Carolina communities claim him as one of their own. In an Asheville Citizen-Times article from June 11, 2009, in his own words Williams clarified, “My mother was born and raised in Mitchell County, I had an aunt who lived in Spruce Pine, and I played in the creeks around her home. I’ve also played some bad golf on their splendid little course at Grassy Creek, so I feel a tug from all three communities.”

Williams received his first coaching job in 1973 as a basketball and golf coach at Charles D. Owen High School, where he coached for five years. From 1978-1988 he served as an assistant coach at North Carolina under Dean Smith, during which he took part in recruiting Michael Jordan. In 1988 Williams left North Carolina to accept the head coaching position at Kansas. In his tenure at Kansas he would go on to win 418 games and lead the Jayhawks to two appearances in the national championship game. In 2003 Williams returned to North Carolina where he collected 485 more wins and three national championships in 2005, 2009, and 2017.

In 2007 Williams was inducted into the Naismith Basketball Hall of Fame. He concludes his hall of fame career with 903 wins, a mark that is third all-time by a Division I head coach. The mark he left on college basketball will forever be felt by the players he coached, competitors he coached against, and the fans who cheered for him each and every game.