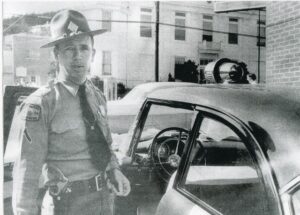 This photograph of North Carolina State Highway Patrol Officer Charles L. Radcliffe appeared in LIFE in April 1957.  He was in Bakersville in connection with an attempted rape trial which was featured in the magazine.

Charles Lewis Radcliffe was born 10/30/1926 in Roanoke Rapids, Halifax County, NC.  His parents were Mr. and Mrs. Clarence Radcliffe; his father worked as an electrician at Rosemary Manufacturing Company.  Charles had a brother and 2 sisters.

When Charles was 7 years old, he was playing tag, ran into the street, and was struck by a car, resulting in a severe head injury.  According to a 10/6/1961 article in the Tri-County News, “This incident played a big part in helping him choose a career.”  Additional impetus towards a law enforcement track was a Career Day during his sophomore year in high school, “after hearing a discussion about Patrol activities from our local patrolman.”

Following service in the US Navy, Radcliffe entered law enforcement after passing physical and mental examinations and attending in early 1950 the North Carolina State Highway Patrol School at the Institute of Government in Chapel Hill.  He was sworn in as a patrolman on 3/1/1950; next he had “5 weeks of training with a seasoned patrolman in Wilkes County.”

Radcliffe was transferred to Spruce Pine on 4/16/1950 and began 13 years as a patrolman in Mitchell County.  Many Mitchell County residents had contact with the officer, no doubt, as he stopped them for driving infractions.  His name is seen frequently in issues of the Tri-County News and the Asheville Citizen-Times as the investigating law enforcement officer for traffic accidents and other criminal activities such as bootlegging.

During his tenure in Mitchell County, Radcliffe wrote “Rules of the Highway,” a series of articles for the Tri-County News.  “The primary purpose of the North Carolina State Highway Patrol is to prevent accidents,” said Patrolman Radcliffe, “If all motorists followed the laws and courtesy of the highway, accidents would be largely eliminated.”

Besides the hazards of the road, Highway Patrol officers face many other dangers.  According to an article in the Asheville Citizen-Times on 5/14/1953, Radcliffe was shot at by a man for whom he had an arrest warrant.  “… someone took a shot at the officer.  One shot passed over the top of his cruiser, Radcliffe reported.”

His next job began in 1963 as an investigator with the National Automobile Theft Bureau.  Radcliffe was working in Raleigh when he married Amanda Henderson Allen of Marion on 6/29/1973.

Prior to his retirement, Radcliffe became an investigator with the NC Department of Insurance.  There are newspaper reports of his various cases around Western NC, including Wilkes County and Hendersonville.  The job brought him back to Mitchell County in early 1989 when he investigated a case of insurance fraud.

Radcliffe’s career in law enforcement spanned a total of 39 years.  He lived the last years of his life in Newland, and died there on 7/13/2020.  He was survived by his wife of 47 years, Amanda Allen Radcliffe, 2 sons, 2 daughters, and 2 grandchildren.  He is buried in Oak Grove Cemetery in McDowell County, NC.