The Road to Peppers Creek

Ruth Lawrence, state supervisor of Negro Elementary Schools, reported, after a visit to Mitchell County in 1950, that she observed 7 boys and girls “learning their lessons” in a church at the foot of an unidentified mountain. She reported that this was the only black school in the county and it operated for 6 months.

Many of the details are still emerging; however, there have been 4 schools which were established to serve African American children in Mitchell County before Ms. Lawrence’s visit.

According to one account mentioned by the historians John and Ida Van Noppen, Mitchell County in the 1880’s used its share of “state funds allocated for the education of Negro children to provide one Negro school centrally taught.” The name and location of that school is yet to be determined.

Emily C. Prudden, a teacher from Orange, Connecticut, in 1885 vacationed in Blowing Rock. Seeing no schools in the area, she began establishing schools for poor white children including ones in Elk Park and Altamont (then a part of Mitchell County). After establishing the Elk Park Academy, she felt guilty seeing black children not able to attend school. She then purchased land and built a school in Elk Park for black children. Although there were many negative reactions from the local white people, some violently, a school named Elk Park serving black children continued until 1958-59 when it was renamed Toe River. After integration in 1964-65 the school, under the direction of Josephine A. Houston, had 2 teachers and was closed after that school year.

In 1944-45, the Grassy Creek School under Bessie Montgomery as principal/teacher was listed as a Negro school. That school continued through 1949 under Ms. Montgomery, but was not listed again.

Beginning in 1929-30, Hudgins School was listed as a Negro school under principal H.O. Johnson in McDowell County. Hudgins continued until 1956 when the name was changed to Mountain View. During this time McDowell and the town of Marion had separate school systems with Hudgins/Mountain View as a town school.

Apparently, Ms. Lawrence’s 1950 report encouraged local Mitchell County officials to provide better educational opportunities for African American children, especially those of high school age. Avery and Yancey counties had significant numbers of African American students, which warranted having schools in those counties. Mitchell County did not. In the fall of 1950, J.E. Hunter of the Division of Teacher Allotment in Raleigh sent a telegram requesting the town of Marion to accept seven or eight students from Mitchell County to attend Hudgins School.

Mitchell County purchased a 1950 Chevrolet 3600 or 3800 series van similar to the “used” one pictured above. The color scheme was typical NC school bus orange with black fenders and black grill trim. It had only the 2 side doors (driver and passenger) and the double rear doors. 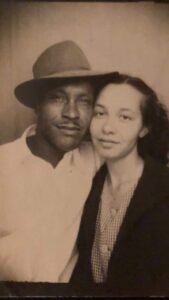 George Lee Jackson from Altapass was the designated driver and made the round trip down and up the Peppers Creek gravel road twice a day every school day for over a decade. In 1962, the van was traded in for an 18 passenger more conventional school bus which followed the same schedule and route until 1965 when Mitchell County schools were formally integrated. Maintenance records indicate that these were the best kept of all the buses in the county.

There are a great many other interesting and compelling details related to African American struggles to get a formal education in Western North Carolina as is true with America generally. Dealing with 400 years of ancestral enslavement and another 100 years of governmentally sanctioned apartheid, African Americans along with other people of color continue to confront social injustice in the classroom and beyond.

However, it is important that we recognize and constantly remind each other of the many individuals such as those named above who gave of themselves and have been critically important in the lives of Mitchell County students. Each one a champion of education and the ideals we believe are America.