The Sea Claimed Petty Officer Billy Joe McKinney, But His Heart Is Still in the Mountains 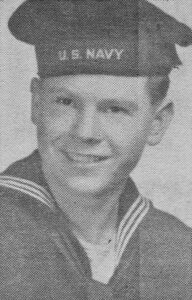 Billy Joe grew up near Bakersville with siblings Imogene, Bobby Dean, James Bruce, Linda, and Judy.  He graduated from Bowman High School in 1949, valedictorian of his class, and attended Milligan College for a time, prior to his enlistment in the Navy.  Billy Joe received his wings on April 6, 1952, and was stationed at the US Naval Air Base in Norfolk, VA.  Petty Officer McKinney was an electronics technician, radar operator, and navigator.

The last letter his family received from Billy Joe, an October 1953 article in The Tri-County Newsrevealed, was written Aug. 30, 1953 while he was at sea.  He had the usual serviceman’s complaint about the mail service, but assured his folks he was well.  He had flown that day, he said, and “got a good look at the other ships in the convoy.”  He described the two largest aircraft carriers, the Roosevelt and the Midway, the battleship Wisconsin, plus various other tankers, cruisers, and destroyers,” for a total of 156 vessels.  “Mom,” he wrote, “I am really enjoying this cruise, more than I expected.”

According to a letter written to McKinney’s parents by his commanding officer, Van V. Eason, Jr., Billy Joe and the other members of his crew were on “a regularly scheduled training flight” in a squadron of several aircraft on the evening of Sept. 30, 1953.  They were practicing low-altitude searchlight runs on various targets, with Billy operating the searchlight on his aircraft.  Observers on the USS Weeks reported that the plane had passed over, when “suddenly it seemed to falter and then crashed into the ocean.”  Billy and his crew had been killed instantly, and all rescue attempts located was floating debris.

Commander Eason goes on to laud Petty Officer McKinney as one of the finest men he’d had serve under him.  “It was not only that he was an expert air crewman, probably the finest in the squadron, but his personal character was an inspiration to the men with whom he worked.”  Eason described Billy Joe as “cheerful, ready and willing to help others,” and he “never grumbled” about long hours at work.  He must have spoken to many on board about the mountains in which he lived, as Eason wrote that Billy Joe’s “heart is still in the mountains.”

He told his mother he had been reading the Bible, in II Corinthians, and was trying to “be what it says” in 5:17: “Therefore if any man be in Christ, he is a new creature; old things are passed away; behold all things are become new.”  Telling his family about several of his crewmates regularly meeting for prayer and Bible study, Billy Joe wrote, “You have my testimony that I am a born-again child of God.  Pray for me that I might do whatever God has for me to do.”

Billy Joe was a member of Fork Mountain Baptist Church, and his memorial service was held there on Oct. 4, 1953, with ministers Oliver Young and Ernest Canipe officiating.  The US Navy provided an honor guard.  While McKinney’s body had been lost at sea, there is a memorial marker for him in the Andrew Garland Cemetery in Mitchell County which reads “Died in the Service of his Country.”