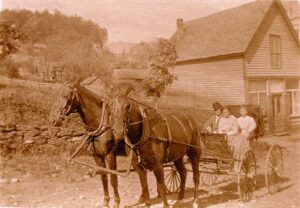 The McBee Building appears in the background as an unidentified family rides past.

The McBee Museum in Bakersville, home to the collections of the Mitchell County Historical Society, has been a fixture in the county seat for over 130 years. Serving as a store, doctor’s office, and lawyer’s office, the building has seen many significant events through the years, including the construction of the Historic Courthouse next door in 1907, the tragic Bakersville Fire of 1923, and the construction (and subsequent destruction due to fire) of the Mitchell County Jail which sat next door until 2002.

The building sits on land that was once owned by Sydney Prestwood, who had lived in the region from at least the 1850s. His son, Robert Luther Prestwood, went to medical school in Nashville, TN and returned to Bakersville in 1889 to begin his medical practice at the age of 26. He most likely erected the building that is now the museum. It originally had two stories and may have been the first stand-alone physician’s office in the county. The building doubled as a drug store during this time. Prestwood passed away just 11 years after setting up practice and constructing the building.

After his death in 1899, the museum building was purchased by Mitchell County Sheriff George Pritchard in 1901. Pritchard apparently rented the building for various enterprises, including a storehouse and general store. He later sold it to Mary Garland. Doctor V. R. Butt purchased the museum building from Garland in 1907, turning it once again into a physician’s office. 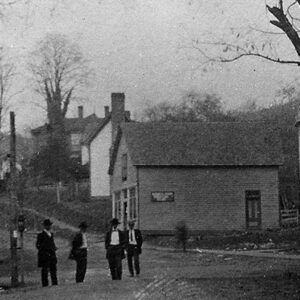 The McBee Building prior to the 1923 Bakersville Fire.

McBee Jr., born in the Philippines, was a practicing attorney in Mitchell County for over 40 years. The building remained in the McBee family for decades, and it served as a barber shop after McBee Jr. retired from practicing law.

In 1995, Martha McBee Summerour, McBee Jr.’s daughter, deeded the building to the Mitchell County Historical Society, who turned the office into a museum for Mitchell County’s history and heritage.

MCHS has maintained ownership and operation of the building for the past 27 years. Recently, archival consultants evaluated the building’s displays and condition and gave several recommendations to repair structural issues and enhance the museum displays. The Society is undertaking a fund drive to address these recommendations so we can offer the general public not just a safe place for artifacts of local interest, but also a working museum for students, researchers, and the general public to learn and experience history in an interactive way. Get more information on the project.