The 2019 Mitchell County Historical Society Christmas Ornament honors this historic building, built of cast stone and designed in the Classical Revival style. which is home to the MCHS offices on the first floor. The building was designed by H.L. Lewman and was constructed by the Falls City Construction Company. The Yancey County Courthouse, built in 1905, is almost a clone of the building.

The first Mitchell County Courthouse, built in 1869, served the county well until 1907 with the grand opening of the new Courthouse which was built on the site of the first courthouse. More than just a courtroom where justice was served, the building was a gateway to the lives of Mitchell County people. It held records of their births, deaths, marriages, divorces, military service, property sales, and mineral rights. Minutes of the County Commissioners were kept there also. It was where young men reluctantly or bravely went to sign up for the draft and where other young men gathered on their way to war.

The 2019 Mitchell County Historical Society Christmas Ornament honors this historic building, built of cast stone and designed in the Classical Revival style. which is home to the MCHS offices on the first floor. The building was designed by H.L. Lewman and was constructed by the Falls City Construction Company. The Yancey County Courthouse, built in 1905, is almost a clone of the building. It is glass and comes in a box to protect it during shipment and storage. The ornament is $22 and can be ordered online by clicking the button below. You can also purchase ornaments at the MCHS office located in the Mitchell County Historic Courthouse in Bakersville during business hours (Wednesday-Saturday 10:00 a.m. – 4:00 p.m.).

There are no reviews yet.

Only logged in customers who have purchased this product may leave a review.

Donate to MCHS
The Mitchell County Historical Society is a 501(c)(3) non-profit organization, which means your donations are tex-deductible under the limitations of tax law. Your contributions help us continue our work. Please consider making an online donation by clicking the button below.
Becomer A Member
Membership in the Mitchell County Historical Society helps us preserve the history and heritage of Mitchell County, North Carolina, plus it nets you some neat benefits. Learm more about (and apply for) membership here 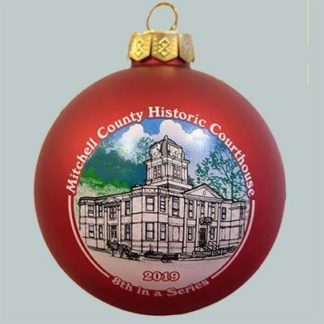